Microsteris is a monotypic genus of flowering plants in the phlox family containing the single species Microsteris gracilis, known by the common name slender phlox.

The segregation of this species into a genus of its own is controversial, and many botanists continue to include the plant in genus Phlox. Genetic analysis is continuing.

Microsteris gracilis is native to western North America from northwestern Canada to the American Midwest and West Coast, through Mexico, as well as parts of South America. It is native to all the diverse plant communities in California. 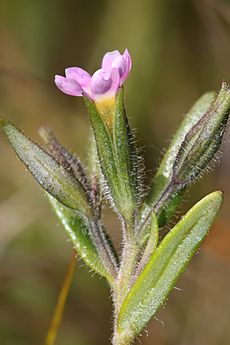 The flower has a tubular yellow throat encased in a tubular gladular-hairy calyx. Corolla lobes are just 1 to 2 mm long.

Microsteris gracilis is an annual herb which is variable in shape, taking a decumbent, branching, sometimes almost tuftlike form or growing erect and very slender. Its maximum height approaches 20 centimeters, but it may be much smaller.

The lance-shaped leaves are 1 to 3 centimeters long and oppositely arranged except for the upper ones, which are alternate. The herbage is glandular and hairy in texture. The inflorescence at the top of the stem bears one or more small flowers.

The flower has a tubular throat around a centimeter long encased in a tubular calyx of sepals. The flat corolla has five flat-tipped or notched lobes just 1 or 2 millimeters long. The flower is white to bright pink with a yellowish throat.

All content from Kiddle encyclopedia articles (including the article images and facts) can be freely used under Attribution-ShareAlike license, unless stated otherwise. Cite this article:
Microsteris Facts for Kids. Kiddle Encyclopedia.