The Middleham Hoard is a coin hoard found near Middleham, North Yorkshire in England. It dates from the period of the English Civil War, and consists of 5,099 coins, all silver. It is the largest hoard of coins buried during the Civil War to have been discovered. The hoard was discovered in June 1993 by William Caygill while using a metal detector. Though referred to as one hoard, the coins were buried in three pots in two pits. These had slightly different deposition dates; likely in the later 1640s, though the person making the deposits was probably the same. The coins are dispersed between museums and private collections, 54 of them now in the Yorkshire Museum's numismatic collection.

William Caygill, a metal detector enthusiast discovered the hoard on 22 June 1993 within the grounds of Cotescue Park, on the south-west edge of the small market town of Middleham. Caygill discovered the first two pots (A and B), and returning two days later he discovered a third pot (C). 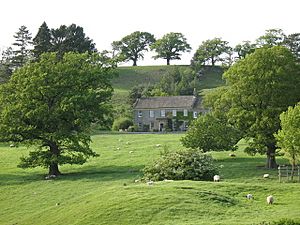 The pots were found in the grounds of Cotescue Park, which had been a royal hunting lodge, and is situated just north of the town of Coverham, about 1.2 miles (2 km) south-west of Middleham Castle. In the 17th century Cotescue Park was the seat of Sir Christopher Croft (died 1649), who was Lord Mayor of York in 1629 and 1641. Adam Loftus, 1st Viscount Loftus (c. 1568–1643), formerly Lord Chancellor of Ireland (1619–1639), lived at Coverham during the early 1640s until his death in 1643. His son, Edward Loftus, 2nd Viscount Loftus, lived in Middleham Castle until 1644, after which time the castle was put to use as a prison. Although Middleham Castle did not see any fighting during the Civil War, it was partially demolished some time after 1646 so that it could not be used as a garrison.

Two of the pots (A and B) were discovered together, and the third pot (C) was discovered about twenty paces to the west. All three pots were covered with a capstone made from local Coverdale sandstone. The latest coins in Pots A and B date to 1645–1646, suggesting a date of deposition of about 1646. Pot C includes ten shilling coins with a late portrait of Charles I that are not represented in either Pot A or Pot B; Pot C also includes a single shilling with a "sceptre" privy-mark that was in use from 1646 to 1649. These features suggest that Pot C was deposited at a slightly later date than Pots A and B, possibly in 1648. However, the physical closeness of Pot C to Pots A and B suggest that all three pots were buried by the same family. 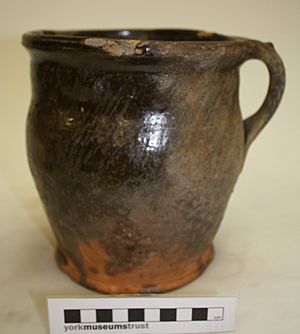 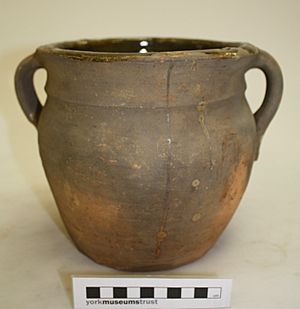 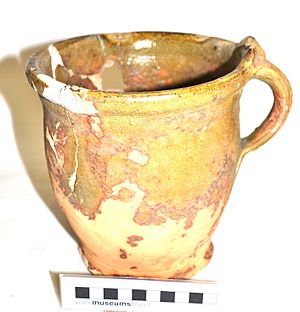 The three pots in which the coins were buried in are all rather similar types of mid-seventeenth century kitchen ware. They are all handled jars that would have been used in the kitchen, and as they show no signs of being used for cooking it has been surmised that they would have been used for food storage. Pot A and Pot B are most similar, and Pot A has been definitively identified as Ryedale ware. Pot C is somewhat different from Pots A and B, and is not Ryedale ware, but comes from a different unidentified source. 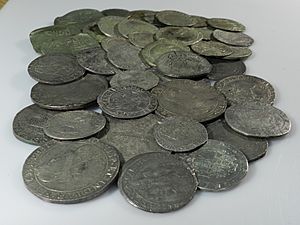 A selection of the coins from the side

The coins include English issues of all the monarchs between Edward VI and Charles I, Scottish and Irish coins, and those of Philip IV of Spain and his governors in the Spanish Netherlands (Archduke Albert and his wife Isabella), as well as 39 counterfeits. The total face value was over £312. Of the 5,099 coins, 4,772 were English, 31 Scottish, 10 Irish, 245 from the "Spanish possessions in Europe" (all Netherlands) and 2 from the Spanish New World.

The distribution of coins in the three pots between reigns is shown in the table below.

Many of the coins had been clipped, the proportions rising as their age increased.

All content from Kiddle encyclopedia articles (including the article images and facts) can be freely used under Attribution-ShareAlike license, unless stated otherwise. Cite this article:
Middleham Hoard Facts for Kids. Kiddle Encyclopedia.