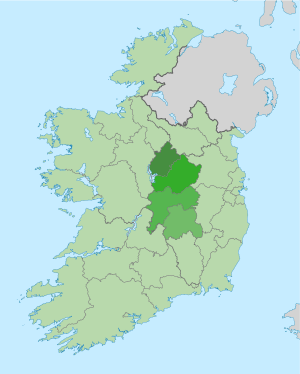 The Midlands region of Ireland with each constituent county council highlighted.

The Midlands Region (coded IE012) is a NUTS Level III statistical region of Ireland. It consists of the territory of the counties of Laois, Longford, Offaly, and Westmeath. The Midlands region spans 6,524 km2, 9.5% of the total area of the state and according to the 2011 census has a population of 282,195.

The Midlands Region is also a popular tourist destination due to its rich natural beauty such as lakes, waterways and canals, as well as a rich history, heritage and culture dating from early Christian times.

The Midlands Region is the poorest region in Ireland with incomes well below the national average (approximately only 60% of national income levels). This region receives substantial funding from the European Union which has been used to fund road projects such as the M6 and M7/M8 project and help in farmers and flooded communities.

The Midlands region was administered by the Midland Regional Authority, which consisted of 24 elected representatives including the region's representative on the EU Committee of the Regions. These representatives met once a month and were nominated from the four local government councils of the region:

According to the 2011 census, the region had a population of 282,410, which constitutes 15.8% of the national population. Its population density was 43.3 persons per km2. The population of the regional capital, Athlone, is over 20,000.

The region has a growing dependency ratio which is stated as having implications on health care, the types of housing needed as well as care for the elderly.

A list of the ten largest settlements in the Midlands region. County capitals are included and are shown in bold.

All content from Kiddle encyclopedia articles (including the article images and facts) can be freely used under Attribution-ShareAlike license, unless stated otherwise. Cite this article:
Midlands Region, Ireland Facts for Kids. Kiddle Encyclopedia.