Mihaela Fileva (Bulgarian: Михаела Филева) (born May 15, 1991) is a Bulgarian singer and songwriter. Her career started in 2005 when she was part of Bulgarian National Television – “Hit Minus One”. She rose to fame with her 2013 single 'Опасно близки' ("Dangerously close").

Fileva was born in Veliko Tarnovo on May 15, 1991. She began playing the piano at the age of 6 but soon she found out that her talent was singing. She was part of the music show "Hit-1" in 2006. She studied in NMI "Pancho Vladigerov".

After X Factor she joined the label Monte music Ltd. Her first single is "Когато ти трябвам" (feat Billy Hlapeto) in 2012. She was featured in other singles with Grafa and VenZy. One of the most successful singles of her career was "А Дано ама Надали"

On April 18, 2019 she gave her first solo concert in Hall 1 of The National Palace of Culture in Sofia. 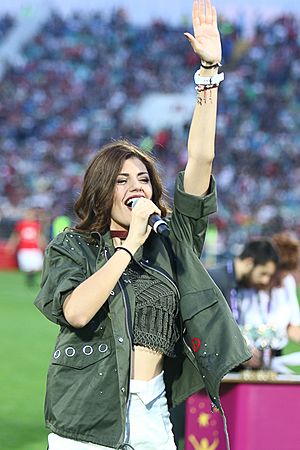 All content from Kiddle encyclopedia articles (including the article images and facts) can be freely used under Attribution-ShareAlike license, unless stated otherwise. Cite this article:
Mihaela Fileva Facts for Kids. Kiddle Encyclopedia.