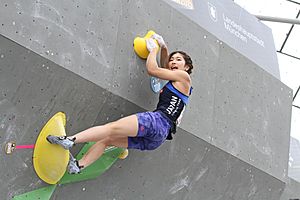 Her father and sister introduced her to climbing when she was 9, and she competed in her first world cup aged 17. She is one of the most successful young climbers on the Bouldering World Cup circuit and has recently started competing in speed and lead in preparation for the 2020 Tokyo Olympics, where climbers are supposed to compete in all disciplines. In 2018, she won the Bouldering World Cup by earning one gold medal and six silver medals in the seven events of that season.

In December 2020, Nonaka's qualification for the Tokyo 2020 Olympics was confirmed after a dispute between the IFSC and the Japan Mountaineering and Sport Climbing Association.

Number of medals in the Climbing World Cup

All content from Kiddle encyclopedia articles (including the article images and facts) can be freely used under Attribution-ShareAlike license, unless stated otherwise. Cite this article:
Miho Nonaka Facts for Kids. Kiddle Encyclopedia.