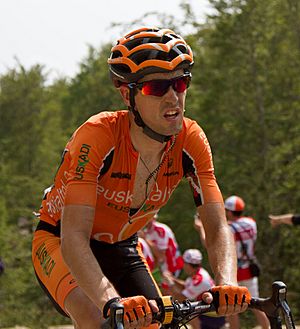 Born in Leitza, Nieve won the sixteenth stage of the 2010 Vuelta a España, shaking off four riders to win solo in the mountain finish at the Alto de Cotobello. He earned another prestigious victory in the fifteenth stage of the 2011 Giro d'Italia, the queen stage of that year's edition, which Alberto Contador later described as the most difficult stage of his life. Nieve had broken away early, and crested the penultimate climb of the day, the Passo Fedaia, with only Stefano Garzelli in front of him. On the lower slope of the final climb to Gardeccia-Val di Fassa, Nieve passed Garzelli, and held on to win the stage after having spent a little less than 7 hours and a half in the saddle.

In 2014, he won stage 8, the final stage of the Critérium du Dauphiné as well as finishing 8th overall.

In 2015, Nieve finished 8th overall in the Vuelta a España, his highest Grand Tour finish to date.

In 2016, Nieve won stage 13 of the Giro d'Italia. He also went on to win the mountains classification. Nieve also rode the Tour de France, where he helped Chris Froome take overall victory as one of his mountain domestiques.

In August 2017, it was announced that Nieve would join Mitchelton–Scott for the 2018 season. During the 2018 Giro d'Italia he rode strongly and won stage 20. He finished 10th overall in the 2019 Vuelta a España, cracking the top 10 in the Vuelta for the fourth time in his career. During the 2020 Tour de France he did something that he had never done in his entire career: abandon a grand tour. This is notable because prior to this he had completed eighteen grand tours in a row, he completed two grand tours per year for seven consecutive years and he finished inside the top 25 of every single one of them. He rebounded to ride in the 2020 Vuelta finishing 13th overall. 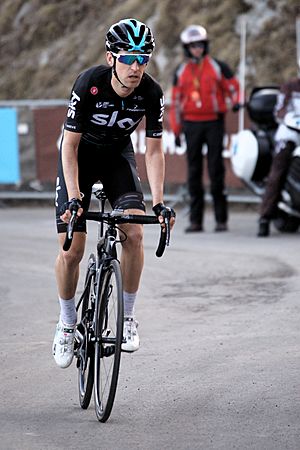 All content from Kiddle encyclopedia articles (including the article images and facts) can be freely used under Attribution-ShareAlike license, unless stated otherwise. Cite this article:
Mikel Nieve Facts for Kids. Kiddle Encyclopedia.