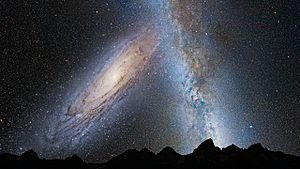 Based on data from the Hubble Space Telescope, Milky Way galaxy and Andromeda galaxy are predicted to distort each other with tidal pull in 3.75 billion years, as shown in this illustration.

The collision between the Milky Way and Andromeda will happen about four billion years in the future.

The Andromeda galaxy is approaching the Milky Way at about 110 kilometres per second (68 mi/s) as shown by its blueshift. Until 2012, it was not known whether the possible collision was definitely going to happen or not, because its proper motion was too small to measure.

In 2012, researchers concluded that the collision is sure to happen. They used the Hubble Space Telescope to track the motion of stars in Andromeda between 2002 and 2010 with great accuracy. Andromeda's tangential or sideways velocity with respect to the Milky Way was much smaller than the speed of approach. Therefore, it is expected that it will collide with the Milky Way in around 4 billion years.

Such collisions are relatively common. Andromeda, for example, has collided with at least one other galaxy in the past. Several dwarf galaxies such as SagDEG are already colliding with the Milky Way and being merged into it. The Antennae galaxies are an example of two roughly equal spiral galaxies colliding.

All content from Kiddle encyclopedia articles (including the article images and facts) can be freely used under Attribution-ShareAlike license, unless stated otherwise. Cite this article:
Milky Way–Andromeda collision Facts for Kids. Kiddle Encyclopedia.