The Mills Building and Tower is a two-building complex following the Chicago school with Romanesque design elements in the Financial District of San Francisco, California. The structures were declared San Francisco Designated Landmark #76, and were listed on the National Register of Historic Places in 1974. 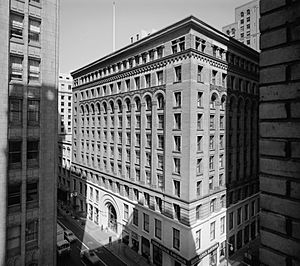 The original 10-story, 47 m (154 ft) structure was designed by Burnham and Root/D.H. Burnham & Company completed 1892; and after surviving the 1906 earthquake, was restored by Willis Polk in 1908, who oversaw subsequent additions in 1914 and 1918. Named for early San Francisco financial tycoon, Darius Ogden Mills, it is regarded as the city's second skyscraper, after the Chronicle Building (1890).

All content from Kiddle encyclopedia articles (including the article images and facts) can be freely used under Attribution-ShareAlike license, unless stated otherwise. Cite this article:
Mills Building and Tower Facts for Kids. Kiddle Encyclopedia.