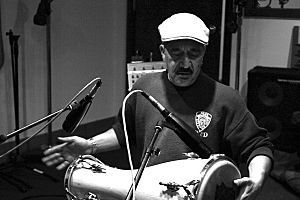 Milton Cardona (November 21, 1945 – September 19, 2014) was a Puerto Rican jazz and salsa percussionist, vocalist and conga player. He had over five hundred recordings, and made seven albums between 1985 and 2007. He worked on the soundtrack of the movie El Cantante (2007). He worked with musicians such as Spike Lee, Paul Simon, David Byrne, Celia Cruz, and the rock band Cream.

Cardona was born in Mayagüez. He was married to Bruni.

All content from Kiddle encyclopedia articles (including the article images and facts) can be freely used under Attribution-ShareAlike license, unless stated otherwise. Cite this article:
Milton Cardona Facts for Kids. Kiddle Encyclopedia.