The Minnesota Marine Art Museum (MMAM) is an art museum in Winona, Minnesota, United States, specializing in marine art. The MMAM features five galleries of world-class art and artifacts including impressionism and Hudson River School paintings, marine art, folk art sculptures and traveling exhibits. Located on the banks of the Mississippi River, the museum is located in a unique, turn-of-the-century-style building and landscaped with over 60,000 native plants.

The Minnesota Marine Art Museum opened on July 27, 2006, with an initial collection contributed by Winona couple Mary Burrichter and Bob Kierlin, founder of Fastenal. Expansions to the museum were completed in 2009, 2013, and 2014. 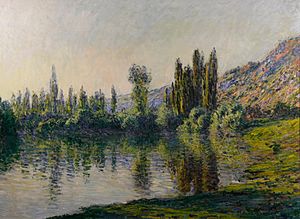 Claude Monet's La Seine à Vétheuil (1881) is among the works displayed by the MMAM.

One of two surviving versions of Washington Crossing the Delaware by Emanuel Leutze was acquired in 2014 for the MMAM. This version of the painting, the third and final version created by Leutze, is a smaller scale version which most recently was on display at the White House prior to its acquisition by the MMAM.

All content from Kiddle encyclopedia articles (including the article images and facts) can be freely used under Attribution-ShareAlike license, unless stated otherwise. Cite this article:
Minnesota Marine Art Museum Facts for Kids. Kiddle Encyclopedia.