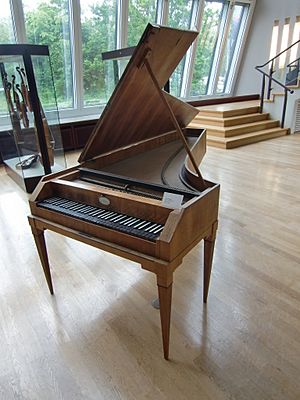 The Minuet in G, WoO 10, No. 2 is a piece of music for the piano. It was composed by Ludwig van Beethoven. The piece was originally written for orchestra. This version was lost. Only an arrangement for piano exists. It is a very popular piece, especially among beginning pianists.

The piece is composed in what is called ternary form or ABA form. This means that the piece has three distinct sections. The first and the third sections (the A sections) are the same. The second section (the B section) is entirely different music. The B section often provides a contrast in some way to the A section. The tempo marking for the Minuet in G is Moderato. The meter is 3/4.

Like the A section, the B section (or the Trio) is composed of two 8 bar passages for a total of 16 bars. Like the A section, it begins in the tonic key of G major, and modulates to the dominant key of D major at the end of the first 8 bars. This passage is repeated. The second 8 bars begin in the dominant key and end in the tonic key. These 8 bars are repeated. The entire B section is characterized by flowing, uninterrupted eighth notes in the right hand. The left hand plays quarter notes but briefly joins the right hand in playing eighth notes at the beginning of the second 8 bar passage. The left hand returns to playing quarter notes as the passage closes. When the B section is completed and all the repeats have been taken, the piece returns the A section. This return is usually played without performing the repeats.

All content from Kiddle encyclopedia articles (including the article images and facts) can be freely used under Attribution-ShareAlike license, unless stated otherwise. Cite this article:
Minuet in G (Beethoven) Facts for Kids. Kiddle Encyclopedia.