Mirbelia rubiifolia is a small and spreading shrub in the family Fabaceae. Heath Mirbelia is endemic to Australia. It is found in sclerophyll forest and woodlands, as well as heath on sandy soils on the coast or tablelands, often in areas liable to inundation. Distribution is from Croajingolong National Park in Victoria northward to Queensland.

Mirbelia rubiifolia was first described as Pultenaea rubiaefolia by Henry Cranke Andrews in 1804. It had been taken to England and cultivated in Hammersmith in 1792. James Edward Smith gave it the name of Mirbelia reticulata in 1805 but the name was ruled illegal, but it was later placed in that genus (and gaining its current name in the process) by Scottish botanist George Don in 1832. Its species name is derived from the resemblance of its leaves to those of the genus Rubus.

A ground hugging plant, Mirbelia rubiifolia seldom reaches more than 30 cm (12 in) tall. The pointed leaves are arranged in threes, mostly 1 to 2.5 cm (0.39 to 0.98 in) long and 2 to 4 mm wide. The leaves are made conspicuous by the prominent leaf veins on the upper surface. Attractive purple or pink flowers form in spring between September to December. Rare occurrences of white flowers have been recorded. The fruit is an egg-shaped pod, around 5 mm long.

Mirbelia rubiifolia is rarely cultivated, but adapts well to a part-shaded spot in a subtropical garden. Supplementary water in dry spells is beneficial. It can be an untidy and scrambling shrub which can look better with pruning. 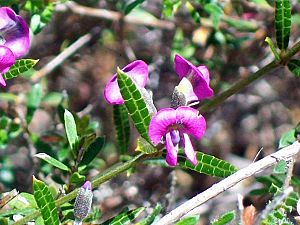 All content from Kiddle encyclopedia articles (including the article images and facts) can be freely used under Attribution-ShareAlike license, unless stated otherwise. Cite this article:
Mirbelia rubiifolia Facts for Kids. Kiddle Encyclopedia.