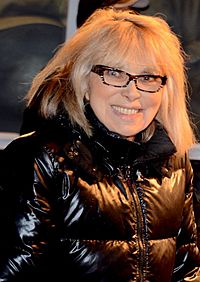 Darc appeared as a lead character in Jean-Luc Godard's 1967 movie Week End. She was also known for her role as Christine in Le Grand Blond avec une chaussure noire and Le retour du grand blond. Darc is a Chevalier of the Légion d'honneur and Commandeur of the Ordre national du Mérite.

Darc died at a Paris hospital while in a coma after suffering a stroke on 28 August 2017, aged 79.

All content from Kiddle encyclopedia articles (including the article images and facts) can be freely used under Attribution-ShareAlike license, unless stated otherwise. Cite this article:
Mireille Darc Facts for Kids. Kiddle Encyclopedia.