Mirror Lake is a pond on the campus of The Ohio State University in Columbus, Ohio. Historically, the lake was spring-fed, and sat on the property of William Neil in North Columbus (then a city of its own, which would later be annexed by Columbus). The trustees in charge of purchasing land for the new Ohio Agricultural and Mechanical College (which would later become the Ohio State University) chose to purchase Mr. Neil's land after drinking from the spring. A German trustee reportedly stated "It's hard to get a Dutchman away from a spring like that." The spring dried up in 1891 when the city of Columbus struck the source of the spring while installing a trunk sewer line through campus. The water source was subsequently provided by the city of Columbus municipal water supply, at a new location on campus near the location of the original lake. Visitors, students, faculty, and staff enjoy the fountains that run in spring, summer, and autumn.

In 2014, a well was dug to feed the lake from groundwater, eliminating the need to use municipal water.

Light up the Lake 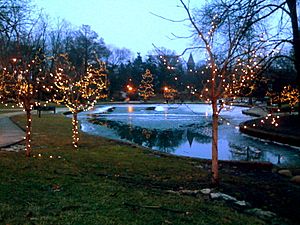 Mirror Lake during at Light Up The Lake event

Light Up The Lake is an event hosted by The Ohio Staters Inc., a student organization at The Ohio State University, to kick off the holiday season. Students hang white seasonal lights throughout the Mirror Lake and Browning Amphitheatre area. A lighting ceremony takes place when the lights are turned on for the first time of the season, usually the week following Thanksgiving.

It is a tradition for students to jump into the lake around midnight on the Tuesday night prior to the annual football game between the Ohio State Buckeyes and the Michigan Wolverines. Even though students have jumped into Mirror Lake according to tradition since 1969, the modern tradition started in 1990 when Jim Jones led a parade of students on a traditional march around campus. At the end of the parade — at Mirror Lake — students made the celebratory jump. While the jumps of the past few years have drawn crowds of several thousand, less than 100 people leaped into the lake in 1990, led by someone named "Marmaduke" and a few other AEPi fraternity members wanting to add to the historic rivalry. Approximately 12,000 people either jumped or were near the lake for the 2009 jump. However, with a change in the Big Ten scheduling to add a bye week to the season coming in 2010 puts the game on the Saturday during Thanksgiving weekend, threatening the tradition as the Thursday night prior to the game would be Thanksgiving. Students have suggested moving the jump to the Tuesday prior to the game to allow the jump to continue. As of November 23, 2010, the jump was on a Tuesday night for the first time and a dedicated following of six thousand fans before midnight (the jump takes place for most students between the hours of 10pm and 2am). 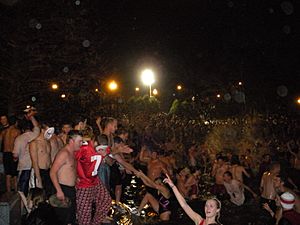 Students jumping in Mirror Lake before the 2009 game

2013 has seen a change in the attitude of the University toward this tradition. The Ohio State University required wristbands to participate in the 2013 jump which was scheduled for November 26. The area was fenced off, and only those with the wristbands were allowed to enter the area; the area spanned from Neil avenue to past Browning amphitheater. The wrist bands were available at the Union to enrolled Ohio State students.

In defiance of these regulations, another jump took place on Monday, November 25, 2013, the night before the regularly scheduled Michigan game jump. Through the use of social media, many students organized a last minute unofficial jump as a response to school officials. Students upset at the new regulations tore down the fences and jumped in the lake a night earlier than planned.

On November 25, 2015, shortly after midnight, Austin Singletary's body was found underwater after jumping into Mirror Lake during the annual jump. According to Ohio State's website, Singletary was a student in the university’s College of Education and Human Ecology, majoring in human nutrition, pursuing a minor in business administration and worked as a Social Change Site Leader via the University's Outreach arm, Buckeye Civic Engagement Connection. A preliminary investigation and autopsy concluded that the death was the result of a fracture of the C-5 vertebra, which can lead to paralysis of the arms, legs and diaphragm, causing death. He was pulled from the lake in cardiac arrest at 12:20 a.m. Wednesday. He immediately received treatment by on-site paramedics and was rushed to Wexner Medical Center on Ohio State's campus, but later died. University Officials took to social media and news outlets to help identify Singletary. President Michael V. Drake later released a statement, saying, "We are heartbroken over this horrible tragedy. We have tentatively identified the young man as a student and are in the process of reaching out to his family. During this difficult time, counseling services will be made available throughout the holiday weekend for those who seek support."

Ohio State Officials quickly announced plans to work with students and the OSU community to end the annual jump. Ohio State's Undergraduate Student Government soon after released a statement agreeing to work with the University to end the tradition and "create a new one".

A notable non-Michigan game jump occurred on the night of May 1, 2011, when students jumped into the lake in the wake of the death of Osama bin Laden, announced on television at approximately 11:30 pm.

On November 22, 2019, the University announced that the lake would be drained in order to prevent anyone from jumping in the lake before the annual Michigan game.

All content from Kiddle encyclopedia articles (including the article images and facts) can be freely used under Attribution-ShareAlike license, unless stated otherwise. Cite this article:
Mirror Lake (Ohio) Facts for Kids. Kiddle Encyclopedia.