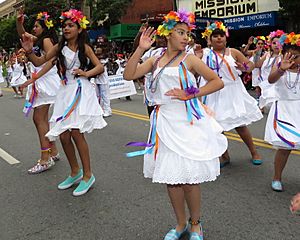 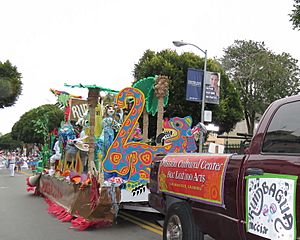 Mission Cultural Center for Latino Arts (MCCLA) is an arts nonprofit that was founded in 1977, and is located at 2868 Mission Street in the Mission District in San Francisco, California. They provide art studio space, art classes, an art gallery, and a theater. Their graphics department is called Mission Grafica, and features at studio for printmaking and is known for the hand printed posters.

The center's building was listed on the National Register of Historic Places on December 29, 2020.

MCCLA is active in the local community with supporting a series of annual events in the neighborhood such as the Carnaval parade, Dia de los Muertos, and others. Since 2003, MCCLA has been hosting an annual mole sauce competition. The MCCLA is very active in the annual Carnaval parade, teaching related dance classes, building floats for the parade, help with designing Carnaval costumes, creating banners and posters, and more. Additionally MCCLA is active in the annual Dia de los Muertos in the Mission District with erecting alters in Garfield Square park. They have hosted an annual neighborhood art exhibition in February, Corazón del Barrio, where local artists and craftsmen sell works, prints, jewels, pottery, and weaving.

The idea of a neighborhood community arts space had been in discussion starting in 1972. In 1976, the Mission Arts Alliance was formed, led by Alejandro Gato Murguia and their first meeting was with the San Francisco Arts Commission. A building was purchased by the city and prior to becoming the arts center, the building was used as a furniture store named "The Shaft". Mission Cultural Center for Latino Arts (MCCLA) was founded by 1977 by artists and community activists to promote the experiences of Chicano, Central American, South American, and Caribbean people. It was formally named, Centro Cultural de La Mission.

Early artists active in the organization included many writers and poets such as Ernesto Cardenal, Nina Serrano, Roberto Vargas, and Raul Salinas. They called themselves the Pocho–Che group and they printed many political books and flyers including the Chicano zine El Pocho-Che. By 1978, a bulletin arrived from the Sandinista National Liberation Front calling for urgent action and support for the Nicaraguan Revolution. As a result, the leaders started to leave the Centro Cultural de La Mission group to participate in the Sandinista guerrilla offensive, and the new leadership for Centro Cultural de La Mission under Alfonso Maciel changed the direction away from political activities. By 1980 the Pocho-Che group had disbanded.

The graphics and printing department, Mission Grafica, was founded in 1982 by Jos Sances and Rene Castro.

All content from Kiddle encyclopedia articles (including the article images and facts) can be freely used under Attribution-ShareAlike license, unless stated otherwise. Cite this article:
Mission Cultural Center for Latino Arts Facts for Kids. Kiddle Encyclopedia.