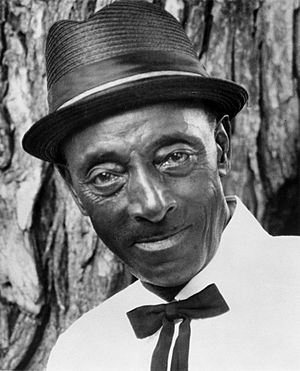 Fred McDowell (January 12 1904 - July 3 1972) (also known as Mississippi Fred McDowell) was a Delta blues singer and guitar player. His parents died when he was young.

McDowell was born in Rossville, Tennessee, near Memphis. He started playing guitar when he was 14 and played at parties around where he lived.

McDowell moved to Memphis in 1926 where he played for money. Soon after, he moved to Como, Mississippi in 1940 or 1941 and worked as a farmer. He still played at parties.

Mostly, he played slide guitar using a pocket knife and then a slide made from a beef rib bone, later switching to a glass slide. He played with the slide on his ring finger.

In the 1950s, people became more interested in Blues Music and McDowell became more famous. He recorded for the first time in 1959 with Alan Lomax and Shirley Collins. He started playing on electric guitar rather than acoustic but said "I do not play no rock and roll". He taught Bonnie Raitt the slide guitar technique, and was written about by The Rolling Stones'.

McDowell died of cancer in 1972 and is buried at Hammond Hill M.B. Church, between Como and Senatobia.

All content from Kiddle encyclopedia articles (including the article images and facts) can be freely used under Attribution-ShareAlike license, unless stated otherwise. Cite this article:
Fred McDowell Facts for Kids. Kiddle Encyclopedia.