Mister Softee, Inc., doing business as Mister Softee, is an American ice cream truck franchisor, best known in the northeastern United States. The company is based in Runnemede, New Jersey.

Mister Softee, Inc. was founded in 1956 in Philadelphia, PA by brothers William Aloysius Conway (1922–2004) and James Francis Conway (1927–2006). Headquartered in Runnemede, New Jersey since 1959, Mister Softee became one of the largest franchisors of soft ice cream in the United States, with about 350 franchisees operating 600 trucks in 15 states. Around 1999, William and James' sons, John P. Conway and Jim Conway, Jr., took over the business.

English-teacher-turned-entrepreneur-now-stand-up-comedian Turner Sparks was roommates with Alex Conway – Jim Conway, Jr's. son while attending the University of Miami. Sparks spoke fluent Mandarin and had been teaching English in Suzhou. In 2007, with Alex's help, Sparks launched a Mister Softee China franchise in Suzhou with just one truck. Five years later, Sparks had ten trucks and 25 employees, with plans to expand throughout China's eastern region. 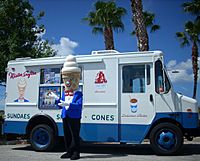 Mister Softee mascot and official truck at an event in Tampa, Florida.

The melody broadcast from Mister Softee trucks – bearing the likeness of a music-box – is a contrafactum of Arthur Pryor's 1905 composition, "The Whistler and His Dog." Philadelphia ad man, Les Waas (né Lester Morton Waas; 1921–2016) scored it with new words for Mister Softee, and titled it, "Jingle and Chimes." Waas created close to 1,000 jingles.

The creamiest dreamiest soft ice cream,
You get from Mister Softee
For a refreshing delight supreme
Look for Mister Softee

The creamiest, dreamiest soft ice cream
You get from Mister Softee
For a refreshing delight supreme
Look for Mister Softee

Michael Bloomberg, while Mayor of New York, launched an ambitious initiative in 2002 to crack-down on city noise, which included jingles broadcast from ice cream trucks – and in particular, the jingle from Mister Softee trucks. In 2005, in the face of opposition from citizens and members of the City Council, he compromised. Rather than banning mobile jingles, he permitted the trucks to air them, but only while in transit.

Mister Softee has defended its trademarks, notably in the following two cases:

With respect to defending the trademarks, Mister Softee vice president Jim Conway has stated, "For 58 years we've spent our time, energy, and money developing brands. We're one of the most recognized brands. The people who are infringing on our trademark are not only hurting Mr. Softee, but also hurting our mom and pop franchisees. We take these actions to protect them as much to protect our own brand."

In June 1961, Doug Quattlebaum, an American Piedmont blues guitarist, singer and songwriter, was 're-discovered' playing popular and blues songs through the public address system of his Mister Softee ice cream van. The blues historian, Pete Welding, who became known for discovering talent in unusual places, heard his performances and arranged for him to record an album. Released by Bluesville Records, Softee Man Blues (1963) had a photograph of Quattlebaum in his ice cream uniform on its front cover.

All content from Kiddle encyclopedia articles (including the article images and facts) can be freely used under Attribution-ShareAlike license, unless stated otherwise. Cite this article:
Mister Softee Facts for Kids. Kiddle Encyclopedia.