Moe's Southwest Grill, referred to informally as Moe's, is an American fast casual restaurant franchise chain that was founded in Atlanta, Georgia, in December 2000 by Raving Brands. According to the 2016 Harris Poll EquiTrend survey, Moe's is the "Fast Casual Mexican Restaurant of the Year", passing former top restaurant Chipotle Mexican Grill despite having fewer than half the number of locations.

The name "Moe's" originated as an acronym for "Musicians, Outlaws and Entertainers," and this theme led to the music-related artwork found in the restaurants.

Moe's offers various types of food on its menu, including burritos, tacos, quesadillas, nachos, salads, stacks, burrito bowls, and salsas. Ingredients can be added or subtracted from the standard entree for customization. Every order comes with chips and salsa on the side. 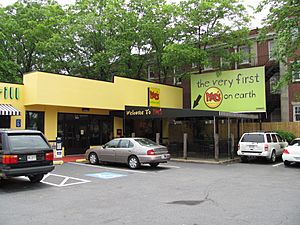 In 2011 Moe's opened its first location outside the United States in Turkey.

In September 2012 Moe's opened its first Russian franchise located in the center of Moscow near the Kremlin on Pyatnitskaya Street.

All content from Kiddle encyclopedia articles (including the article images and facts) can be freely used under Attribution-ShareAlike license, unless stated otherwise. Cite this article:
Moe's Southwest Grill Facts for Kids. Kiddle Encyclopedia.