Moeritherium is a extinct genus of primitive mammals. It represent a very early stage in the evolution of elephants. These prehistoric mammals are related to the elephant and, more distantly, the sea cow. They lived during the later Eocene in what is now North Africa.

Moeritherium did not resemble living elephants. It was about as large as a tapir. It had short, strong legs, a relatively long body, and a short tail. The feet of Moeritherium were broad and had flat-hoofed toes. 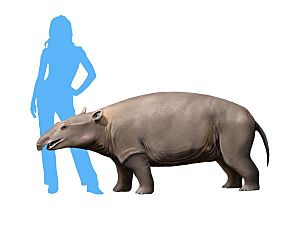 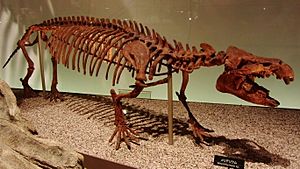 The Moeritherium species were pig-like animals that lived about 37-35 million years ago, and resembled modern tapirs or pygmy hippopotamuses (however, they are not believed to be closely related to either of those animals). M. lyonsi was smaller than most or all later proboscideans, standing only 70 centimetres (2.3 ft) high at the shoulder and weighing 235 kilograms (518 lb). The shape of their teeth suggests that they ate soft water vegetation.

The shape of the skull suggests that, while Moeritherium did not have an elephant-like trunk, it may have had a broad flexible upper lip like a tapir's for grasping aquatic vegetation. The second incisor teeth formed small tusks, although these would have looked more like the teeth of a hippo than a modern elephant. 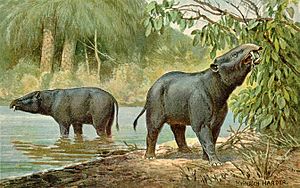 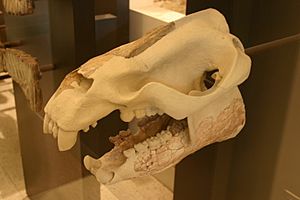 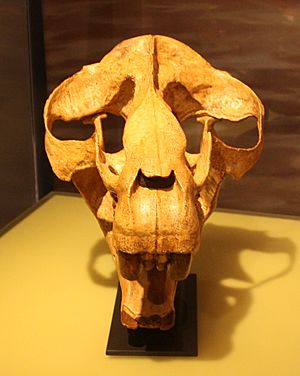 Front view of the skull of Moeritherium lyonsi, Royal BC Museum

Moeritherium is not thought to be directly ancestral to modern elephants; it was a branch of Proboscidea that died out, leaving no descendants. There were several species of other primitive proboscideans in existence during the Eocene, and some, such as Phiomia and Palaeomastodon, looked comparatively more like modern elephants. However, Moeritherium typified a branch of the order that evolved in a quite different way, having only a tapir-like trunk and short legs.

All content from Kiddle encyclopedia articles (including the article images and facts) can be freely used under Attribution-ShareAlike license, unless stated otherwise. Cite this article:
Moeritherium Facts for Kids. Kiddle Encyclopedia.