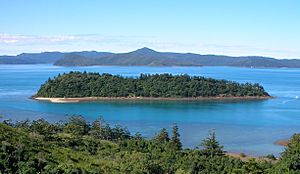 211 different species have been identified in Molle Islands National Park. This includes two vulnerable species, the coastal sheath-tailed bat and the beach stone-curlew. 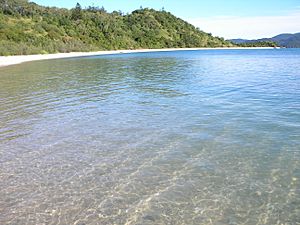 On South Molle Island and Long Island there are marked walking tracks. Most are graded easy and some are suitable for mountain biking. Viewing wildlife, swimming and snorkelling are other popular recreational activities.

The park is accessed by boat from Airlie Beach or Shute Harbour. Tour operators provide day tours and ferry transfer is available from nearby resort islands.

There are numerous locations available to campers. Some have picnic tables and toilets. Open fires and ash-producing stoves are banned.

All content from Kiddle encyclopedia articles (including the article images and facts) can be freely used under Attribution-ShareAlike license, unless stated otherwise. Cite this article:
Molle Islands National Park Facts for Kids. Kiddle Encyclopedia.