Monica Ali (born 20 October 1967) is a Bangladeshi-born British writer and novelist. In 2003, she was selected as one of the "Best of Young British Novelists" by Granta magazine based on her unpublished manuscript; her debut novel, Brick Lane, was published later that year. It was shortlisted for the Man Booker Prize. It was adapted as a 2007 film of the same name. She has also published three other novels.

Ali was born in Dhaka, East Pakistan (now Bangladesh) in 1967 to a Bangladeshi father and an English mother. When she was three, her family moved to Bolton, England. Her father is originally from the district of Mymensingh. She went to Bolton School and then studied Philosophy, Politics and Economics at Wadham College, Oxford.

Brick Lane is a street at the heart of London's Bangladeshi community. Ali's 2003 novel of the same name follows the life of Nazneen, a Bangladeshi woman who moves to London at the age of 18, to marry an older man, Chanu. They live in Tower Hamlets. At first her English consists only of "sorry" and "thank you;" the novel explores her life and adaptations in the community, as well as the character of Chanu, and their larger ethnic community. An additional narrative strand covers the experiences of Nazneen's sister, Hasina through the device of her correspondence. 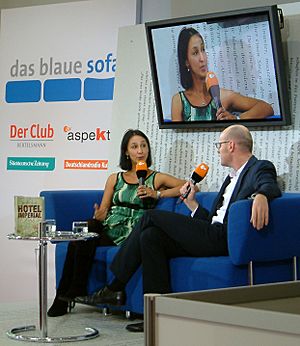 The Observer described Chanu as "one of the novel's foremost miracles: twice her age, with a face like a frog, a tendency to quote Hume and the boundless doomed optimism of the self-improvement junkie, he is both exasperating and, to the reader at least, enormously loveable." Geraldine Bedell wrote in The Observer that the "most vivid image of the marriage is of her [Nazneen] cutting her husband's corns, a task she seems required to perform with dreadful regularity. [Her husband] is pompous and kindly, full of plans, none of which ever come to fruition, and then of resentment at Ignorant Types who don't promote him or understand his quotations from Shakespeare or his Open University race, ethnicity and class module."

The novel was well received by critics in the United Kingdom and the United States, and shortlisted for the Man Booker Prize.

However, the novel provoked controversy within the Bangladeshi community in Britain. Some groups thought Ali had negatively portrayed people from the Sylhet Division, as they constitute the majority of the Bangladeshi immigrants living in the Brick Lane community.

In 2007, the book was adapted as a film of the same name. Starring the Indian actress Tannishtha Chatterjee, the film was distributed both in the UK and internationally.

When production was underway in 2006, some of the Bangladeshi community opposed Ruby Films' intention to film parts of the novel in the Brick Lane area. They formed the "Campaign Against Monica Ali's Film Brick Lane".

The writer and activist Germaine Greer expressed support for the campaign, writing in The Guardian:

As British people know little and care less about the Bangladeshi people in their midst, their first appearance as characters in an English novel had the force of a defining caricature ... [S]ome of the Sylhetis of Brick Lane did not recognise themselves. Bengali Muslims smart under an Islamic prejudice that they are irreligious and disorderly, the impure among the pure, and here was a proto-Bengali writer with a Muslim name, portraying them as all of that and more.

Greer criticised Monica Ali's "lack of authenticity", as she had never spent much time in the Brick Lane community, and no longer spoke the Bengali language fluently. The writer Salman Rushdie criticised Greer for getting involved, saying that her statements were "philistine, sanctimonious, and disgraceful, but ... not unexpected."

Ali opposed the British government's attempt to introduce the Racial and Religious Hatred Act 2006. She discussed this in her contribution to Free Expression Is No Offence, a collection of essays published by Penguin in 2005.

Ali is an opponent of the political development of "hurt feelings industry", a system of laws and legal practices in Southern Asia, mainly India, which enables religious groups and organizations to feel "hurt" by some texts or pieces of art, with the latter ones subsequently banned. Ali coined the term of "marketplace for outrage" describing the commercialization of these practices.

Ali lives in South London with her husband, Simon Torrance, a management consultant. They have two children.

All content from Kiddle encyclopedia articles (including the article images and facts) can be freely used under Attribution-ShareAlike license, unless stated otherwise. Cite this article:
Monica Ali Facts for Kids. Kiddle Encyclopedia.