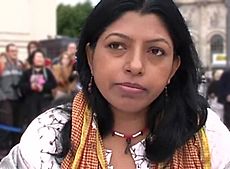 Monira Rahman (*1966) is co-founder and vice-chairperson of Acid Survivors Foundation, a Bangladeshi organization that tries to prevent acid attacks and to help victims of these attacks. ASF was able reduce number of acid attacks in Bangladesh about 40% since 2003.

In 2005 Monira Rahman got the Human Rights Award of the German section of Amnesty International which was given to her on 19th of March 2006 in Berlin, Germany.

All content from Kiddle encyclopedia articles (including the article images and facts) can be freely used under Attribution-ShareAlike license, unless stated otherwise. Cite this article:
Monira Rahman Facts for Kids. Kiddle Encyclopedia.