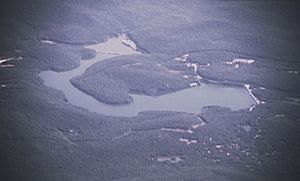 The Monks family had come to the United States in the 1820s and deeded their property in Monksville to the North Jersey Water District Supply Commission in 1928. As part of the construction of the reservoir in the early 1980s, the Monks Cemetery was relocated, including the burial sites of 15 members of the Monks family and another 15 unidentified remains.

All content from Kiddle encyclopedia articles (including the article images and facts) can be freely used under Attribution-ShareAlike license, unless stated otherwise. Cite this article:
Monksville, New Jersey Facts for Kids. Kiddle Encyclopedia.