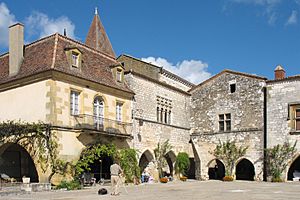 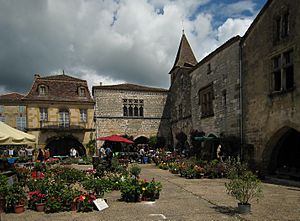 A flower market on the main square

Monpazier is a city in France. It is in the Dordogne departement, in Aquitaine. In 1999, 516 people lived there. It has been named one of the most beautiful villages in France by the association Les Plus Beaux Villages de France. It was built as a bastide. For some time, Eleanor of Aquitaine and Richard III lived there.

The city was founded by Edward I of England in 1284. It is of rectangular design, built around a main square.

The city is about half-way between Bergerac and Sarlat-la-Canéda. Each city is about 45 km away. The River Dropt runs through the city.

All content from Kiddle encyclopedia articles (including the article images and facts) can be freely used under Attribution-ShareAlike license, unless stated otherwise. Cite this article:
Monpazier Facts for Kids. Kiddle Encyclopedia.