The Mont Mégantic Observatory (French: Observatoire du Mont-Mégantic; OMM) is an astronomical observatory owned and operated jointly by the Université de Montréal (UdeM), and the Université Laval (ULaval). Founded in 1978, the observatory houses the second largest telescope in Eastern Canada after David Dunlap Observatory near Toronto. It is situated at the summit of Mont Mégantic, the highest point of Eastern Canada accessible by car. OMM is about 60 kilometres (37 mi) east of Sherbrooke and 190 kilometres (120 mi) east of Montreal.

The asteroid 4843 Mégantic is named for the observatory. 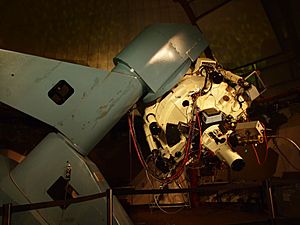 The 1.6 metres (63 in) Ritchey-Chrétien telescope is equipped with a complement of modern instruments. Imaging, spectroscopy, and polarimetry are routinely conducted at both visible and infrared wavelengths.

Efforts to control local light pollution, about one-quarter of which is due to the nearby city of Sherbrooke, have led to the establishment of the world's first International Dark-Sky Association (IDA) Dark Sky preserve around the observatory, covering some 5500 square km (2123 square miles).

ASTROLab is an astronomy activity centre operate by the Parc national du Mont-Mégantic. There are interactive displays about the history of the Universe, the Earth and life. Visitor can take guided daytime tours of ASTROLab and the Mount Megantic Observatory. There are also astronomy evenings, an astronomy festival, and the Perseid Festival.

The observatory is near the center path of totality of the solar eclipse of April 8, 2024.

All content from Kiddle encyclopedia articles (including the article images and facts) can be freely used under Attribution-ShareAlike license, unless stated otherwise. Cite this article:
Mont Mégantic Observatory Facts for Kids. Kiddle Encyclopedia.