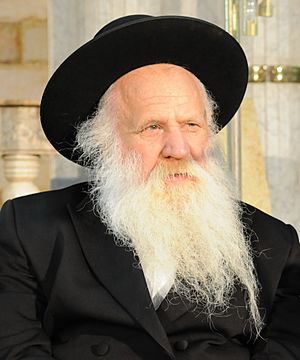 Mordechai Shmuel Ashkenazi (Hebrew: מרדכי שמואל אשכנזי‎; 1943 – 14 January 2015) was an Israeli Orthodox rabbi and writer. He was a member of the Chabad Hasidic movement. He was the chief rabbi of the Chabad community of Kfar Chabad, Israel from 1983 until his death. He was also an authority on Halakha (Jewish law) and Hasidic philosophy.

Ashkenazi was educated in Tel Aviv and Brooklyn, New York in the United States. He had nine sons, some of whom also became rabbis.

All content from Kiddle encyclopedia articles (including the article images and facts) can be freely used under Attribution-ShareAlike license, unless stated otherwise. Cite this article:
Mordechai Shmuel Ashkenazi Facts for Kids. Kiddle Encyclopedia.