Moreton Bay Pile Light was a pile lighthouse positioned at the mouth of Brisbane River, in Moreton Bay, Queensland, Australia, marking the entrance to the port of Brisbane. The light's early history was closely related to the dredging of the Brisbane River. It was established in 1884 as a result of a new channel that was cut, and relocated in 1913 due to another change in the channels. The structure was badly damaged by a barge in 1945 and finally destroyed when hit by a tanker in 1949. An automated light operated on the ruins until 1966–1967 when it was removed.

Dredging of the first channel through the Brisbane River and into the Brisbane Port began in 1862. Though the path was originally planned by Lieutenant George Poynter Heath, RN, who was then appointed Marine Surveyor and was later to be appointed the Portmaster for Queensland, the path was later changed as the Superintendent of the dredge, Thomas Francis, located what he believed to be a better path. After much debate and a Select Committee of the Queensland Legislative Assembly, it was decided to continue with the path suggested by Francis. The dredging of the channel has completed in 1866 and it was known as the Francis Channel. However, Heath did not give up on his original path, and by 1882 work had begun dredging a path according to Heath's original path and by 1883 the new channel was operational.

The operation of the lighthouse was delayed by bad weather. It was first used on 31 May 1884. The installation of the telegraph line to Brisbane was delayed even longer and it was only installed on 8 August. The apparatus was a 4th order dioptric lens and it was displayed at 44 feet (13 m) above high-water mark, at the top of the structure. The light characteristic shown was occulting for two seconds every 12 seconds during flood tide and fixed during the ebb. It was also sectored, showing white light when the ships are in the direction for the deep water channel and red otherwise, and had an intensified sector using reflected light from the unused direction.

In addition to the task of pointing ships into the channel, the lighthouse also signaled ships about the state of the tide. During the day this was performed using two day signals installed on two corners of the structure, while during the night two 6th order dioptric lights showing different colors coded the state of the tide. The different colours were changed manually, by lowering glass cylinders over the lanterns, which could be done from inside the structure. Records of the tide were also kept automatically by floats in tubes which graphed the tide level. The graphs were replaced every month and were sent to Greenwich where they were kept. 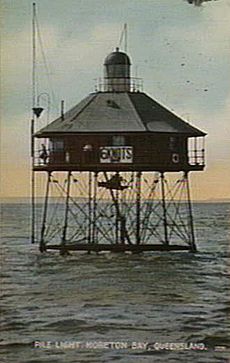 A recommendation to improve the channel was made by Lindon Bates in 1901. Bates recommended a new path, the cutting of which commenced in 1908 and was finished on 1 October 1912. With this new cutting the pile light had to be moved to a new position. Anticipating the need, tenders for the construction of the superstructure were published in January 1912 and were accepted by March of that year. On February 11, 1913 the old lighthouse was discontinued, though a small light was attached to the remaining platform which was eventually destroyed in the 1960s.

On 3 March 1945, the pile light was badly damaged when hit by a US refrigerated barge towed by a tug. The lighthouse keepers remained on duty, and the lighthouse was soon repaired, though some damage remained. On 17 October 1949, the lighthouse was rammed by the 15,000 ton British tanker Wave Protector and destroyed. The three light keepers were thrown overboard and rescued by a lifeboat from the Wave Protector.

After the destruction of the second pile light a third one was constructed in late 1952. The third lighthouse was constructed on the site of the destroyed second lighthouse, and used some of the steel piles from the old lighthouse as foundation. Its light was fully automated and unmanned. The light source was an acetylene gas lamp. The light was shown at an elevation of 22 feet (6.7 m) and the characteristic shown was one flash every three seconds, originally white at 335°-91° and red otherwise (Fl. W.R. 3s), though this soon changed to white at 155°-271° and red otherwise. The structure was finally removed in 1966–1967 by the barge Hammerhead.

All content from Kiddle encyclopedia articles (including the article images and facts) can be freely used under Attribution-ShareAlike license, unless stated otherwise. Cite this article:
Moreton Bay Pile Light Facts for Kids. Kiddle Encyclopedia.