Morfa is a district of Swansea, Wales. It straddles the Bon-y-maen and Landore wards and generally covers the eastern part of the district of Landore.

Morfa is originally an old Welsh word for "marsh", not so much used in current parlance but found in Welsh placenames. The area is named after the Morfa copperworks which once existed in the area.

The Morfa Copperworks was started in 1835 and operated until the site closed in 1980. Several of the copperworks buildings still remain on the site.

Morfa was mainly an area of light industry in the late 20th century. Until the development of the Morfa retail park and Liberty Stadium in the new millennium, the area was a post industrial brownfield site with a local sports and leisure complex.

On the west bank were large grass playing fields which were also used for outdoor concerts. The west bank was re-developed into the Liberty Stadium complex 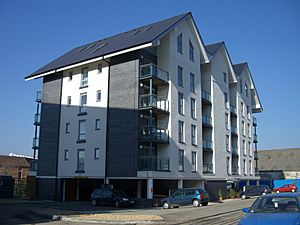 On the east bank of the River Tawe stood the Morfa stadium, indoor and outdoor tennis courts and rubber surfaced football fields. The area now consists of a new town centre comprising the Morfa Shopping Park shopping centre and the Copper Quarter residential area to the south of the retail park. About 700 new homes are being built by the developer Barratt.

Nearby is Pluck Lake known for a sighting of an unusual animal in April 2008.

All content from Kiddle encyclopedia articles (including the article images and facts) can be freely used under Attribution-ShareAlike license, unless stated otherwise. Cite this article:
Morfa, Swansea Facts for Kids. Kiddle Encyclopedia.