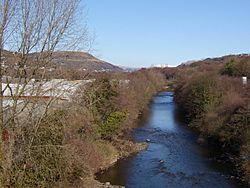 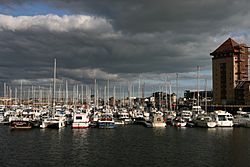 Marina at the River Tawe estuary

The River Tawe ( Welsh: Afon Tawe) is a 30 miles (48 km) long river in South Wales. Its headwaters flow initially east from its source below Llyn y Fan Fawr south of Moel Feity in the Black Mountains, the westernmost range of the Brecon Beacons National Park, before the river turns south and then southwest to its estuary at Swansea. Its main tributaries are the right bank Upper and Lower Clydach Rivers and the Afon Twrch. The total area of the catchment is some 246 km2 (95 sq mi). The Tawe passes through a number of towns and villages including Ystradgynlais, Ystalyfera, Pontardawe, and Clydach and meets the sea at Swansea Bay below Swansea. The Tawe Valley (Cwm Tawe in Welsh) is more commonly known as the Swansea Valley.

Ownership of the riverbed was granted to the Duke of Beaufort in the 17th century by Charles II resulting in exclusive mineral and fishing rights, which is extended as far as requiring permission and payment for bridges which are built over it. This was last exercised in 2008 when Swansea Council was required to pay £281,431 to the estate, as revealed by a Freedom of Information request.

The lower part of the valley was intensely industrialised in the 18th and 19th centuries and was especially impacted by metal refining and working and to a much lesser extent by porcelain manufacture. Large areas of the lower valley remain contaminated by industrial spoil containing copper, lead, nickel and zinc. The only significant extant relic of those times is a major nickel refinery at Clydach which is part of the Canadian company Vale Inco. The quality of the river has now greatly improved. Large salmon swim up the river to spawn, whilst trout are in abundance.

National Cycle Route 43 follows this river for much of its course.

Bridges over the River Tawe within the City and County of Swansea, from north to south:

There are plans for further housing developments on both east and west banks of the River Tawe and a proposal to operate river taxis along the river. A report was commissioned by Natural Resources Wales in 2015 as part of its 'Tawe Trial' initiative - completed by regeneration consultants Trilein Ltd. it recommended a number of initiatives to better connect the urban areas on the west of the river with the more rural areas of Kilvey Hill and Crymlyn Bog beyond to the east.

All content from Kiddle encyclopedia articles (including the article images and facts) can be freely used under Attribution-ShareAlike license, unless stated otherwise. Cite this article:
River Tawe Facts for Kids. Kiddle Encyclopedia.