Clydach is a village and community in the City and County of Swansea, Wales, falling within Clydach ward and the Llangyfelach Parish. It is located some 6 miles (9.7 km) north east of Swansea city centre. Its population in 2001 was 7,320. Welsh is the first language of 24 per cent of the population and both Welsh and English language schools are available. The village lies close to the M4 motorway which can be accessed via the bypass or old road via Ynystawe.

Around 1878 Clydach was a very small community if it could at all have been called that. Maps from this date show Clydach to consist of sub-areas namely 'Mount Pleasant' (the area by high street shops), 'Faerdre' (covering the area nearest to Vardre Road), 'Down' the area that was once 'Down Farm' which is now land laying behind the Farmer's Arms, Clydach and below 'Ty gwyn Road'. There was also an area called Ty Gwyn as Ty Gwyn/White House was present on the land. The road leading to Ty Gwyn is now Ty Gwyn Road and also 'Coed Cae-Du' near Craig Cefn Parc.

The map of c. 1878 Clydach (which can be viewed at the Archive Service at Swansea Civic Centre) shows that number 1 St John's Road was originally the old 'St John's School for Girls, Boys and Infants', which was linked to St John's Church near the shops at Capel Buildings near the Mond. A second school is shown where the current building of Clydach Infants stands which is also for girls/boys and infants.

On a map dated 1899 Clydach has grown substantially to have a larger community base with the school on Twyn-y-Bedw Road being expended upon and a 2nd school being built just a little farther up the same street. The St John's School was by this point being used as a Sunday school and not for general education. There was a Clydach woollen factory not far from the schools on a road named 'Prince Llewellyn Street' or as it is now known 'Factory Road'. St Mary's Church is not on this map and is shown as a blank open space.

In 1918 the Sunday school is still showing on the map under the area name of Vardre close to Mount Pleasant and Graig Felin was known as Aber-Clydach. The top of Clydach near Lone Road and Bryn Mair was named Upper Forge not yet having its slang title of 'Sunny Bank' with the locals. Note: Sunny Bank does not appear by name on any maps seen to date (June 2012).

In the early 19th century, Clydach was a small village in the Swansea Valley. As the coal in the South Wales Valleys was a valuable commodity during the Industrial Revolution, Clydach experienced growth as a through road for transporting goods between Swansea and the many mines and heavy metal industries. The 16 mile(26 km) long Swansea Canal was built through the centre of Clydach between 1794 and 1798. It was constructed to transport up to 400,000 tonnes of coal a year from Ystalyfera to Swansea port. The canal remained profitable until 1902, when losses were first reported. This decline in revenue and profits was largely due to the competition from its rival the Swansea Vale Railway. The last commercial cargo carried on the Swansea Canal was in 1931 when coal was conveyed from Clydach to Swansea. Boats continued to operate on the canal after that date but only for maintenance work, with horse-drawn boats last recorded in Clydach in 1958. Only 5 miles (8.0 km) of the canal's original length of 16 miles (26 km) remain.

The centre of Clydach High Street, the main commercial area of the town has had major investments in improving its facilities. These include reshaping and resurfacing of the road, new flagstones to replace tarmac pavements, new trees, new seats and cycle racks. Work was commissioned by Cwmni Clydach Development Trust, with funding for the schemes provided by the Welsh Development Agency and Swansea City Council. A grant of over £130,000 was made available for local high street businesses to improve the frontage to their stores.

Clydach has a market that is open from 06:00 until 13:00 on Wednesdays and from 09:00 until 16:00 on Sundays. In December 2003 it was reported by the BBC that Trading Standards were investigating how 500 Air Canada in-flight breakfasts came to be on sale at the market. The microwave meals of scrambled egg, bacon, sausage and mushrooms were being sold for 20p. They were supposed to be on a flight departing London Heathrow earlier that morning.

The property on which it stands has now been sold and the market closed in early January 2013. 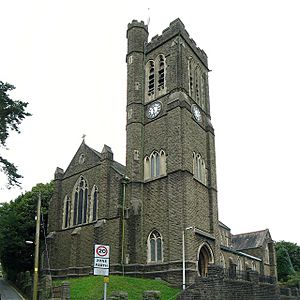 There are a number of churches and chapels in Clydach, serving both English and Welsh language speakers. Clydach is a parish of the Church in Wales, the parish church being St. Mary's on High Street. Other English language churches include Bethel Evangelical Church, Calvary Full Gospel Church (Assemblies of God) and St. Benedicts (Roman Catholic). Two Welsh language chapels remain in Clydach: Calfaria (Welsh Baptist) and Capel y Nant (Welsh Independents). Capel y Nant was formed in 2008 and meets at the former Carmel Chapel. The church was created through the uniting of Hebron and Carmel Independent Chapels. Capel y Nant also welcomes members of Salem Fardre Presbyterian Church, and is in partnership with Clydach English language Methodist Church.

A number of Welsh-speaking churches/chapels in the community have recently closed, though their buildings still remain. These include St. John's (High Street), Hebron (Hebron Road) which is now being converted into a dwelling house by a local resident, whose family have lived in the village for the past 100 years. Also in Clydach is Bethania English Baptist Church, Graig-felin. The Reverend Valentine Evans, who wrote the History of Clydach at the beginning of the 20th century, is buried in its cemetery. A Kingdom Hall of Jehovah's Witnesses located on Capel Road is one of the oldest in Wales.

Originally a nine-hole course (dating back to the 1960s) that was intended to be a resource exclusively for INCO (Clydach Refinery) employees, the course now welcomes golfers of all ages and abilities throughout the year.

The club is easily accessible from the M4 (within 2 km). The course is an easy walking parkland and nestled neatly in the historic Swansea Valley bordered on one side by the meandering River Tawe and by the Swansea Canal. It was renamed Mond Valley Golf Club in May 2012 after Vale Europe outsourced the management to help the golf club progress. The new name draws inspiration from one of the most influential people in bringing nickel to the region, and therefore the Clydach Refinery (Ludwig Mond) and the scenic nature of the location in the Swansea Valley (Valley) and throughout 2012 has been exemplary in drainage and conditioning despite the inclement weather and past perceptions. The course has also been witness to some great golf contests including the Mond Massacre, where the great rivalry between Pethomas and Stefro resulted in a brutal 4 up score for Pethomas securing their name with the greats, and condemning Stefro to pure shame.

Following the demolition of the old Clydach swimming pool (or 'the Baths', or 'Danny's baths' as the locals called it), the Cwmni Clydach Development Trust, commissioned a new multi purpose community resource centre at Forge Fach, at a cost of approximately £1.8 million, funded by the Welsh Assembly Government, City & County of Swansea & Clydach Community Council. The centre opened in 2006. It provides a range of facilities including a community café, a full day care nursery (Forge Fach Day Nursery), a multi-purpose hall, ICT suite, training & conferencing facilities plus an external multi-use games area. In addition there are a number of fully serviced offices rented by local businesses.

Forge Fach was intended to assist in the social and economic regeneration of Clydach and Graigfelen, offering a range of activities & facilities for the benefit of all members of the community. These include exercise classes, social meeting groups, dance classes, diet & fitness, ‘First Strike Karate & Kickboxing Club’& the 'Performance Factory Stage School’. The City & County of Swansea’s Lifelong Learning department & Swansea University’s Dept of Adult Continuing Education use the centre to run a number of adult education classes in subjects such as Drawing & Painting, IT, History, Sociology, French, Spanish & Welsh. In 2011 the City & County of Swansea opened the 'Waterfall View' day service at Forge Fach, enabling local people to have access to a community social services facility as close to home as possible. Forge Fach also acts as an educational venue for the local St. John Ambulance Division, where members of the community can improve their first aid skills.

Recently, a local campaign group has called for Forge Fach to be turned into a health, leisure, wellbeing and swimming centre. In October 2015, the resource centre was taken over by Walsingham Support, a national disability charity, supporting adults with learning disabilities, brain injury and complex health needs. In a very short space of time, the centre has been completely transformed, and is now a tru community hub, leading the way with community integration.

Forge Fach is situated next to the Forge Fach Waterfalls, part of the Lower Clydach River, which runs into the Tawe River and gave Clydach its original name, Clydach-on-Tawe. Clydach is the equivalent of the Irish word Cladaugh, meaning sandy bend/strand.

2006 saw the opening of the Old Public Hall, which was converted into an indoor climbing centre and was renamed 'Dynamic Rock'. It is now home to the Swansea Indoor Climbing Centre. The walls are 12m high and feature overhangs, slabs, pillars, arêtes and arches.

The Cwm Clydach RSPB Reserve is situated on the outskirts of the village, en route to Craig Cefn Park near the New Inn pub.

The Cwm Clydach nature reserve used to be the home to the Nixon and Bell Drift mine. It was affectionately known as Nixon's and was one of the main employers until 1960–1961. It was used after as a pumping station, and would drain water from the Abergelli and Graig Merthyr collieries and then on te then Brynmill colliery at Grovesend.

The colliery was a rock top colliery and there was even a steam boiler underground, which was rare in a colliery, but as there was no gas in the mine at that area it was safe enough.

Little remains of the colliery now, and there is a walk up the valley past other remnants of other NCB and private mines.

Clydach is served by National Cycle Route 43. Major work has recently been undertaken on part of the cycle route between Clydach and Glais. The lottery-funded Sustrans laid a new tarmac path for pedestrians and cyclists, which begins alongside the River Tawe, behind the Vardre Rugby Club, and ends at Station Road in Glais. The tarmac path was mainly built on space used by abandoned railway tracks.

Football - There are a number of football teams that play in Clydach including, F.C. Clydach, Inco, Clydach Sports and Sunnybank W.M.C. All of which play in the Neath & District League.

Rugby - Vardre Rugby Football Club is a sporting venue in Clydach and Clydach's younger residents train out on the pitches behind the building over the canal. They have 1st, 2nd and junior teams and often take part in charitable events to raise much needed cash.

All content from Kiddle encyclopedia articles (including the article images and facts) can be freely used under Attribution-ShareAlike license, unless stated otherwise. Cite this article:
Clydach, Swansea Facts for Kids. Kiddle Encyclopedia.