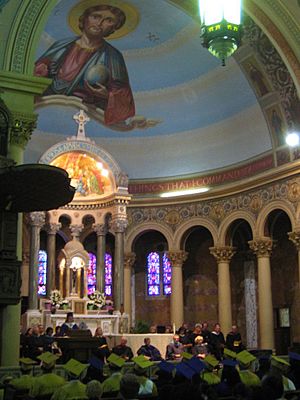 The parish was founded in 1880 by Redemptorist father Aegidius Smulders, a former chaplain in the Confederate army. Initially the parish served a congregation predominately of Irish immigrants, many of whom worked in the tobacco factories. Services were held at first, above Patrick Ratigan's general store on West Jefferson Avenue and later in what was then known as Paddy McMahon's Saloon. Church services were held on the first floor, while the second served as a residence for priests. The first church building, a wood frame structure designed by Redemptorist Brother Thomas, and known as the Little Church on Sand Hill, was dedicated in 1881. A second larger Gothic style church was built in 1896 during the tenure of pastor Benedict Neithart.

As Irish and German residents moved to the suburbs, people of Latin American descent from the Corktown area of Detroit took their place. A mass in Spanish was instituted in 1960. In 1999, The Redemptorists turned the parish over to the Archdiocese of Detroit. The parish school was started by the Sisters of the Immaculate Heart of Mary in 1882. Sisters of the Society of Our Lady of the Most Holy Trinity (SOLT) arrived at Most Holy Redeemer Parish in August 2017 to work in the school and serve the parish. SOLT Seminarians are also in residence at the parish, studying at the nearby Sacred Heart Major Seminary.

Built in 1921, the present church and was dedicated on April 1, 1923. Designed by the firm of Donaldson and Meier, it was constructed in the Roman basilica style with a Romanesque façade. The church seats about 1,400. A campanile was constructed around 1924 in memory of parishioners who died in World War I.

The stained glass double lancet aisle windows were designed by Charles Jay Connick. Those in the south aisle depict the parables of Jesus, those on the north side, the miracles. The clerestory windows are by the Detroit Stained Glass works. The Pewabic mosaic floor tile is by Mary Chase Perry Stratton.

The parish contains a longstanding elementary school, along with the Detroit Cristo Rey High School, which has operated since 2008 at the location of the former Holy Redeemer High School.

As in the other Southwest Detroit neighborhoods, such as Springwells Village, West Vernor Highway is the main commercial thoroughfare. Churches, parks, recreation centers, and theaters anchor neighborhoods such as the West Vernor-Junction intersection that Holy Redeemer parish dominates.

All content from Kiddle encyclopedia articles (including the article images and facts) can be freely used under Attribution-ShareAlike license, unless stated otherwise. Cite this article:
Most Holy Redeemer Church (Detroit, Michigan) Facts for Kids. Kiddle Encyclopedia.