Corktown is a historic district located just west of Downtown Detroit, Michigan. It is the oldest extant neighborhood in the city. The current boundaries of the district include I-75 to the north, the Lodge Freeway to the east, Bagley and Porter streets to the south, and Rosa Parks Boulevard (12th Street) to the west. The neighborhood was listed on the National Register of Historic Places in 1978.

The Corktown Historic District is largely residential, although some commercial properties along Michigan Avenue are included in the district. The residential section is listed on the National Register of Historic Places and is designated as a City of Detroit Historic District. The neighborhood contains many newer homes and retains some original Irish businesses.

The Great Irish Potato Famine of the 1840s resulted in extensive Irish migration to the United States and Canada. By the middle of the 19th century, they were the largest ethnic group settling in Detroit. Many of these newcomers settled on the west side of the city; they were primarily from County Cork, and thus the neighborhood came to be known as Corktown. By the early 1850s, half of the population of the 8th Ward (which contained Corktown) were of Irish descent. Historically, the neighborhood was roughly bounded by Third Street to the east, Grand River Avenue to the north, 12th Street to the west, and Jefferson Avenue/Detroit River to the south.

By the Civil War, German immigrants had begun making inroads into the Corktown neighborhood. Many immigrants had come from German provinces after the revolutions of 1848. By the turn of the century, the original Irish population had diffused through the city, and new immigrants, notably Mexican and Maltese, moved into this older housing. As the century progressed, migrants from the American South, both black and white, were lured by the jobs in the automobile industry and also went to the city. By the middle of the 20th century, the area of Corktown was reduced through urban renewal schemes, the building of light industrial facilities, and the creation of the Lodge Freeway and Fisher Freeway. 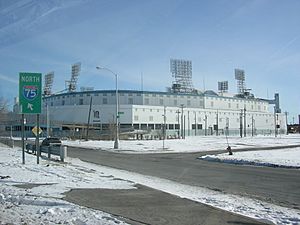 Tiger Stadium was in Corktown at the corner of Michigan Avenue and Trumbull Street until its demolition in 2009.

On June 30, 2015, Quicken Loans announced the opening of its new state-of-the-art, 66,000-square-foot Technology Center in Corktown, at 1401 Rosa Parks Blvd. The new facility will feature two 10,000-square-foot server rooms in addition to training, office, meeting, and technical support space. Half of the data center, including one server room, will be occupied by the Quicken Loans’ technology team. An equal-sized 33,000 square foot portion of the building, including the second 10,000 square-foot server room, is available for lease.

On February 2, 2016, The Detroit Police Athletic League announced the development of its new headquarters and youth sports facility at the old Tiger Stadium site at Michigan and Trumbull Avenues in Corktown, and will break ground there in early April. The new PAL facility will be an L-shaped building that will line the Cochrane and Michigan Avenue sides of the site, leaving the historic playing field open. PAL intends to install a synthetic surface at the site rather than maintain natural grass there, as artificial turf is cheaper to maintain and more adaptable for a multi-sport facility that will see daily use. Opposite the PAL facility across the playing field, a $37-million mixed-use development, The Corner, by Larson Realty is expected to break ground In early 2017. It will create residential, retail and commercial space along the Trumbull and Michigan Avenue sides of the property. Together these two projects will completely redevelop the 10-acre site of the old Tiger Stadium. 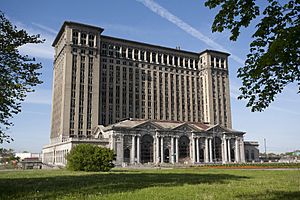 The original buildings in Corktown are Federal-style detached homes and rowhouses built by Irish settlers. A worker's row house circa 1840 is located on Sixth Street and is one of the oldest existing structures in the city of Detroit. In later years, modestly sized Victorian townhouses with Italianate, Gothic, and Queen Anne elements were constructed in the district.

All content from Kiddle encyclopedia articles (including the article images and facts) can be freely used under Attribution-ShareAlike license, unless stated otherwise. Cite this article:
Corktown, Detroit Facts for Kids. Kiddle Encyclopedia.