The homestead's fieldstone house, called Lanark Place after Motherwell's previous Ontario home, is modelled after similar farmsteads built in Ontario. The homestead is surrounded by a shelter belt.

The 3.59 hectares farmstead, in addition to the main house, includes fields defined by fences and shelter belt shrub and tree lines, and agricultural buildings. 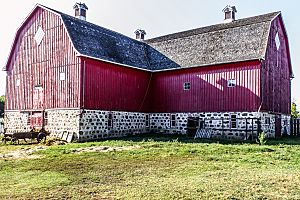 Visitors to the park are immersed in 1907 agriculture. The Motherwell house, barn and outbuildings have been restored to their 1907 appearance. Employees at the park dress in period clothing. During operational months (May 21 to September 1), livestock, including hogs, cows, and chickens, are on site.

The Friends of the Motherwell Homestead operate a restaurant and gift shop on site.

All content from Kiddle encyclopedia articles (including the article images and facts) can be freely used under Attribution-ShareAlike license, unless stated otherwise. Cite this article:
Motherwell Homestead Facts for Kids. Kiddle Encyclopedia.