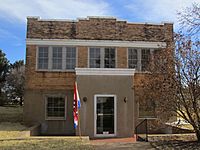 The Motley County Historical Museum in Matador is the former Traweek Hospital. 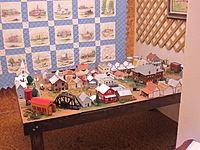 Diorama of early Matador at the Motley County Historical Museum

The Motley County Historical Museum is a repository of the history of rural Motley County, located at 828 Dundee Street in the former Traweek Hospital building in Matador, Texas.

The hospital was built in 1927-1928 by Albert Carroll Traweek, Sr. (1875-1959), formerly of Fort Worth, Texas, the first physician in Motley County and its first county health officer. It was designed by Traweek's uncle, Charles Stephen Oates, a well-known West Texas builder.

Traweek made house calls by horse-and-buggy, motorcycle, and Bendix touring car, which was produced only from 1908-1909. He and his oldest son, Dr. A. C. Traweek, Jr. (1898-1991), obtained the latest technology in their two-story facility, including one large bath for the upstairs patient rooms, hot and cold running water in the operating room, asbestos insulation, and a ramp from the upstairs rear door to the alley below.

In 1991, the hospital was turned over the county. Workers pushed an iron lung, formerly used in the treatment of polio, from the second floor to the ground, and in the process, shattered the device into pieces. The operating room, a patient room, and the bathroom were retained to reveal the story of early medical treatment.

Other rooms in the museum focus upon ranching, saddlemaking, Indian culture, county history, music, veterans, and lifestyles. Researchers may use an extensive collection of newspaper files from both the Matador Tribune and the Motley County Tribune. It has a diorama of early Matador from 1891 to 1910. Other exhibits include clothing, home furnishings, tools, firearms, early photographs of ranch life, and school items.

The museum, which is open from 2 to 5 pm on Monday, Wednesday, and Friday, is also the Chamber of Commerce office in Matador.Located at the intersection of Dundee and Bundy Streets, the museum is across from the Matador United Methodist Church at 902 Dundee.

All content from Kiddle encyclopedia articles (including the article images and facts) can be freely used under Attribution-ShareAlike license, unless stated otherwise. Cite this article:
Motley County Historical Museum Facts for Kids. Kiddle Encyclopedia.