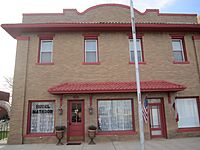 The restored Hotel Matador was founded in 1914 as the Carter Hotel. 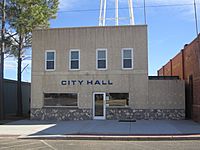 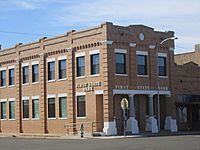 Matador is a town in and the county seat of Motley County, Texas, United States. The population was 740 at the 2000 census. In 1891, it was established by and named for the Matador Ranch. It is located ninety-five miles east of Lubbock, Texas.

The Matador Ranch was consolidated in 1882 by a Scottish syndicate, and a post office opened at Matador in 1886.

At the end of the 19th century, townspeople freed the community from domination by the Matador Ranch, which was liquidated in 1951, by relocating non-ranch families there and electing their own slate of officials.

The community was incorporated in 1912 and made the county seat. The state required that a town have at least twenty businesses. Local ranch hands hence established fraudulent, temporary businesses using ranch supplies. The only real business in Matador at the time was a saloon.

Albert Carroll Traweek, Sr. (1875–1959) was a physician in Matador, originally from Fort Worth, known as the "Pneumonia doctor" for his success in treating patients with that sometimes fatal illness. He was the first Motley County public health officer and established the Traweek Hospital, now the Motley County Historical Museum. In 1915, Dr. Traweek began construction on the Traweek Home, designed by Charles Stephen Oates, Traweek's uncle and a noted builder in West Texas. The two-story stuccoed masonry structure was completed in 1916 at a cost of $14,000. It is a hybrid of Classical Renaissance, Prairie, and Classical Revival architecture.

Among the visitors to the Traweek House was Baldwin Parker, a son of Quanah Parker, the last Comanche chief, as well as state and national officials. The house at 927 Lariat Street in Matador remains in the Traweek family. It received an official historical medallion in 1964 and was designated in 1990 as a Texas Historic Landmark. Dr. Traweek and his wife, the former Allie Rainey, had six children. The house was last occupied by their youngest son, Howard Traweek (1912–1988), the county attorney for five decades, and his wife, the former Eleanor Mitchell (1922–1998).

Luther Bedford "Bob" Robertson (1894–1947), a native of Greenville, Texas, came to Matador in the 1920s. Originally a service station attendant, he opened his own Conoco gasoline business, which he topped with a decorative wooden oil derrick. He patented his design, and in 1939, he replaced the wooden derrick with one of steel. It soared eight-four feet in height and was lighted.

Robertson advertised his business in unusual ways, having maintained a cage of live rattlesnakes for the amusement of tourists. He later added a small zoo of lions, monkeys, coyotes, and a white buffalo. He paid long-distance truckers to place advertising signs at strategic points across the United States. The signs noted the mileage to Bob's Oil Well in Matador. Matador is equidistant from Dallas and Carlsbad, New Mexico, and nine miles (14 km) closer to Denver, Colorado, than to El Paso, Texas. Robertson soon expanded his operation to include a grocery store, cafe, and garage. He was also a Matador civic leader and sought to recognize returning veterans from World War II.

Robertson died in 1947, two weeks before a high wind toppled the steel derrick that had been his trademark. His widow, the former Olga Cunningham (1904–1993), restored it in 1949 with even more prominent lights. Ultimately, the business failed, and attempts by other to revive it were short-lived. At the intersection of U.S. Route 70 and State Highway 70, the site serves as a reminder of a time when bold roadside architecture was only beginning and of a man who promoted his adopted hometown in extraordinary ways.

According to the United States Census Bureau, the town has a total area of 1.3 square miles (3.4 km2), all of it land.

Matador is at the junction on conjoined US Route 62 and US Route 70 and State Highway 70.

There were 308 households out of which 30.8% had children under the age of 18 living with them, 58.1% were married couples living together, 11.0% had a female householder with no husband present, and 27.9% were non-families. 25.6% of all households were made up of individuals and 15.3% had someone living alone who was 65 years of age or older. The average household size was 2.40 and the average family size was 2.88.

According to the Köppen Climate Classification system, Matador has a semi-arid climate, abbreviated "BSk" on climate maps.

All content from Kiddle encyclopedia articles (including the article images and facts) can be freely used under Attribution-ShareAlike license, unless stated otherwise. Cite this article:
Matador, Texas Facts for Kids. Kiddle Encyclopedia.