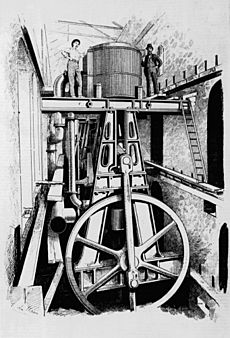 Brisbane's water supply during the convict era came from a reservoir in present-day Tank Street in the Brisbane central business district. There was no pipe network; the water was delivered by water carts to households who stored their water in barrels. The water was described as having "a pea-soup colour and consistency" which required the householders to add wood ashes or alum to their water barrels to precipitate the yellow sediments. On establishment of the Brisbane Municipal Council in 1859, one of their first tasks was to plan a better water supply for the growing town.

The Mount Crosby pumping station was originally steam-powered. Coal was transported via a tramway to fire the boilers to create the steam that drove the pumping engines; the tramway was originally created for construction purposes. The facility originally pumped untreated water from the north or eastern bank of the River. To cater for increased demand the Westbank Water Treatment Plant was built in 1986.

During January 2013 Eastern Australia floods, both treatment plants were unable to process Brisbane River water because it was too muddy and filled with silt.

There is a single lane bridge over the Mount Crosby Weir enabling easy access between the two sites; it is also a public road.

Most of the water treated is sourced from Lake Wivenhoe and Lockyer Creek via the Brisbane River, though some is also from Lake Manchester.

Westbank Water Treatment Plant is able to generate 250 megalitres (8.8×10^6 cu ft) of drinking water each day. During periods of high demand the amount can be increased four-fold to 1,000 megalitres (35×10^6 cu ft). The process takes about 24 hours to convert.

All content from Kiddle encyclopedia articles (including the article images and facts) can be freely used under Attribution-ShareAlike license, unless stated otherwise. Cite this article:
Mount Crosby Pumping Station Facts for Kids. Kiddle Encyclopedia.