Kids Encyclopedia Facts
This page is about the mountain. For the town below the mountain, see Mount Dandenong. For other uses of the name Dandenong, see Dandenong (disambiguation).

Mount Dandenong (Aboriginal Woiwurrung language: Corhanwarrabul) is a mountain that is part of the Dandenong Ranges of the Great Dividing Range, located in the Central District of Victoria, Australia. The mountain has an elevation of 633 metres (2,077 ft) AHD and is located approximately 45 kilometres (28 mi) east of Melbourne.

The mountain is the remains of a massive and explosive volcanic eruption over 300 million years ago. This has left the ranges spread between Coldstream, Emerald and south of Ferntree Gully.

At Mount Dandenong are parks, forests, an arboretum, numerous lookout and many restaurants. 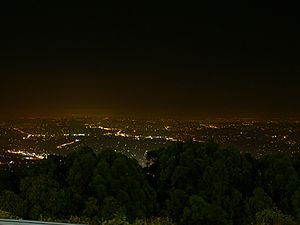 View of Melbourne from the summit at night 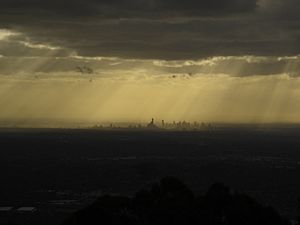 View of Melbourne from the summit at dusk

Close to the summit of the mountain sits the SkyHigh Mount Dandenong restaurant, gardens and maze, re-opened in 2005.

On a clear day it is possible to see across the metropolitan area to the You Yangs and Mount Macedon, putting the Melbourne Central Business District and Port Phillip Bay into a broader geographical context. 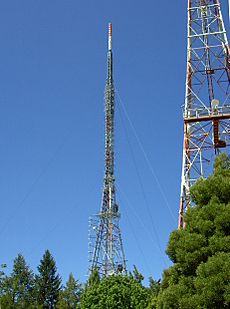 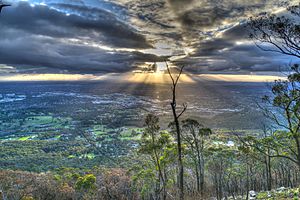 View from the lookout near the Kyeema crash site on Mount Dandenong.

The peak of the mountain, at 633 m above sea level, is also the site of the television and FM radio signal towers for the greater Melbourne area, which range in height from 72 m to 180 m. These towers are visible from quite a distance and distinguish Mount Dandenong from others in the Dandenong Ranges.

Mount Dandenong Tourist Road, the main road going through Mount Dandenong, is host to many local shops. These include cafes, restaurants and eateries, pubs, day spas, wine and fine food purveyors, a nursery and many shops selling local crafts. 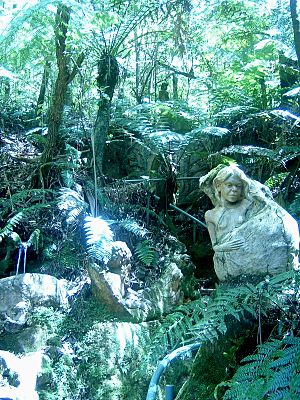 The William Ricketts Sanctuary is situated on the east face of Mount Dandenong. It has over 93 ceramic sculptures woven into the eucalyptus forest.

All content from Kiddle encyclopedia articles (including the article images and facts) can be freely used under Attribution-ShareAlike license, unless stated otherwise. Cite this article:
Mount Dandenong (Victoria) Facts for Kids. Kiddle Encyclopedia.