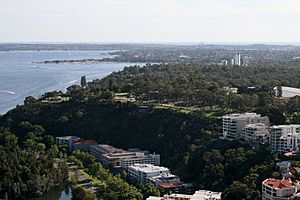 Kings Park and Mount Eliza, viewed from QV.1 in the CBD

Mount Eliza is a hill that overlooks the city of Perth, Western Australia and forms part of Kings Park. It is known as Kaarta gar-up and Mooro Katta in the local Noongar dialect.

It was named in 1827 by the eventual Governor James Stirling, after Eliza Darling who was the wife of New South Wales Governor Ralph Darling. In 1831, Western Australia's first Surveyor General, John Septimus Roe set aside the land around Mount Eliza for public purposes. This had been overturned by 1835 and extensive logging occurred in the area until 1871 at which 175 hectares was set aside for public purposes. Limestone was quarried from the edge of the scarp to build many of Perth's civic buildings including the Town Hall and Supreme Court.

Mount Eliza contains a reservoir, Mount Eliza Reservoir, which supplies the greater Perth CBD and surrounds, and is considered a part of West Perth for administrative purposes.

All content from Kiddle encyclopedia articles (including the article images and facts) can be freely used under Attribution-ShareAlike license, unless stated otherwise. Cite this article:
Mount Eliza (Western Australia) Facts for Kids. Kiddle Encyclopedia.