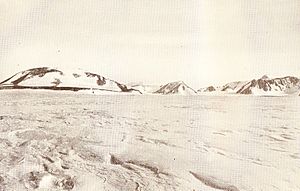 Mount Hope, the dome-shaped hill on the left, photographed by Shackleton's party in December 1908

Mount Hope is a mountain in Antarctica. Ernest Shackleton named it in 1908, when he was on an expedition to reach the geographic south pole. The expedition was named Nimrod Expedition. Mount Hope has a height of 835m. Shackleton climbed the mountain to get a better view of the sourrounding area. On the top of the mountain, Shackleton had a better view of the Beardmore Glacier. Shackleton and his team reached the polar plateau, but did not reach the geographic south pole.

Three years later, Robert Falcon Scott started an expedition which used the route Shackleton had taken. They reached the south pole, but fronze to death on their way back.

All content from Kiddle encyclopedia articles (including the article images and facts) can be freely used under Attribution-ShareAlike license, unless stated otherwise. Cite this article:
Mount Hope (Antarctica) Facts for Kids. Kiddle Encyclopedia.