Mount Keith Mine facts for kids

Mount Keith Mine is an open pit nickel mine in Western Australia. It is operated by BHP Billiton. The site's closest landmark is the town of Wiluna, 85 kilometres (53 mi) to the north. 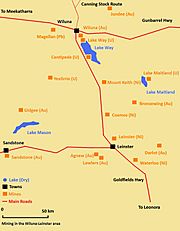 Mining in the Wiluna-Leinster area.

The mine is located on the north end of the 800 kilometres (500 mi) long Norseman-Wiluna Greenstone belt, with nickel sulfide deposits of the dyke-like or sill deposit type. The important known nickel deposits are in the ultramafic rocks of the lower cycle, around 2700 Ma old. In 1971, the mine was thought to be able to provide 10% of the world's demand for nickel; in 1992 it was estimated as containing 270 million tons of sulfide ore, grading 0.6% nickel, enough for about twenty years.

Owned by WMC Resources Limited, it was acquired by BHP in June 2005.

Mount Keith is part of BHP's Nickel West operations, which includes, apart from Mount Keith, the Leinster Nickel Mine, the Kambalda Nickel Concentrator, the Kalgoorlie Nickel Smelter and the Kwinana Nickel Refinery. Production figures published by the company at the end of 2008 are for the whole Nickel West Operations and not broken down to individual mines. In the calendar year 2008 Nickel West produced 85,800 tonnes of nickel. At the time, Nickel West also included the Ravensthorpe Nickel Mine.

All content from Kiddle encyclopedia articles (including the article images and facts) can be freely used under Attribution-ShareAlike license, unless stated otherwise. Cite this article:
Mount Keith Mine Facts for Kids. Kiddle Encyclopedia.