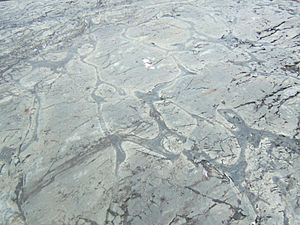 Greenstone belts are large regions of very ancient metamorphosed volcanic rocks. The name comes from the green colour of the minerals in the rocks. Chlorite, actinolite and other green amphiboles are the typical green minerals.

Greenstone belts were originally formed of igneous rocks, such as basalt. The belts formed at ancient oceanic spreading centers and in volcanic island arcs. They may be several thousand kilometres long. Later, they were metamophosed, with minor sedimentary rocks in-between the volcanic formations.

Those greenstone belts which formed in ancient oceans are now found on land in Archaean and Proterozoic cratons between granite and gneiss bodies. The rocks are mafic, meaning they are high in magnesium and silica.

All content from Kiddle encyclopedia articles (including the article images and facts) can be freely used under Attribution-ShareAlike license, unless stated otherwise. Cite this article:
Greenstone belt Facts for Kids. Kiddle Encyclopedia.