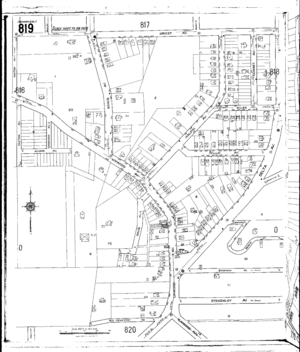 Mount Lookout's several-block business district is referred to as Mount Lookout Square and contains restaurants, bars, a variety of shops and service providers, and one of the steps of Cincinnati. Mount Lookout Tavern anchors the east end of the Square and attracts college students from the several area universities (including the University of Cincinnati, Xavier University and Northern Kentucky University), as well as twenty and thirty-something working professionals. Zip's Cafe, established 1926, is one of the more well-known restaurants on the Square as its burger is continually ranked as a top burger in Cincinnati (5th best in 2015 by Cincinnati Magazine).

Mount Lookout is considered by Hamilton County, Ohio as home to Alms Park as well as Ault Park, although the nearby neighborhood of Hyde Park also considers Ault Park as part of their community. The area contains a neighborhood swim club named Mt. Lookout Swim and Tennis Club. Kilgour School, Cardinal Pacelli School and St. Ursula Villa School are the only schools located within the community.

All content from Kiddle encyclopedia articles (including the article images and facts) can be freely used under Attribution-ShareAlike license, unless stated otherwise. Cite this article:
Mount Lookout, Cincinnati Facts for Kids. Kiddle Encyclopedia.