Mount Norris el. 9,842 feet (3,000 m) is a mountain peak in the northeast section of Yellowstone National Park in the Absaroka Range. In 1875, the peak was named for and named by Philetus Norris, the second park superintendent (1877–1882). Norris was on a visit to the park with several mountain guides, including Collins Jack Yellowstone Jack Baronette. They ascended the peak at the head of the Lamar Valley and presumed they were the first white men to do so, thus naming it Mount Norris. 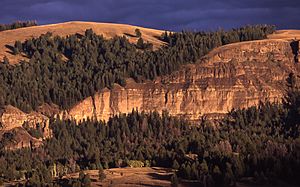 All content from Kiddle encyclopedia articles (including the article images and facts) can be freely used under Attribution-ShareAlike license, unless stated otherwise. Cite this article:
Mount Norris Facts for Kids. Kiddle Encyclopedia.