The Mount Pleasant Radio Observatory is a radio astronomy based observatory owned and operated by University of Tasmania, located 20 km east of Hobart in Cambridge, Tasmania. It is home to three radio astronomy antennas and the Grote Reber Museum.

The observatory has two active radio telescopes: the Mount Pleasant 26 m antenna and a 12 m AuScope VLBI Antenna. The Observatory is linked to the University of Tasmania's Hobart campus with a 25 km fibre optic cable, installed in 2007. 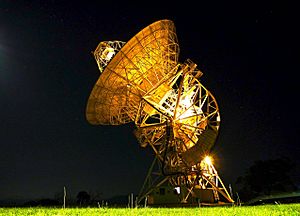 The 26-meter dish at Mount Pleasant as seen at night

The 14 m Vela telescope that was constructed in 1981 as a dedicated instrument for observation of the Vela Pulsar has been decommissioned since 2006 and is in the process of being refurbished. The telescope used to track the pulsar 18 hours a day, nearly continuously for over 20 years.

The 26 m Radio dish came from the Orroral Valley Tracking Station, ACT, where it was used as a satellite tracker within the Spacecraft Tracking and Data Acquisition Network and then for support to NASA manned missions. The 26 m telescope is used in Australia's very long baseline interferometry (VLBI) network.

There is also a museum on site dedicated to the life and works of Grote Reber. It contains some of his ashes and a state of the art 3D theatre. It also discusses the major role Tasmania plays in radiophysics The museum hosts about 5000 visitors annually and runs several Open Days each year. University of Tasmania students also act as tour guides as part of their studies.

All content from Kiddle encyclopedia articles (including the article images and facts) can be freely used under Attribution-ShareAlike license, unless stated otherwise. Cite this article:
Mount Pleasant Radio Observatory Facts for Kids. Kiddle Encyclopedia.