Mount Royal (8PU35) is a U.S. archaeological site close to where the St. Johns River exits from Lake George in Putnam County, Florida. It is located three miles (5 km) south of Welaka, in the Mount Royal Airpark, off County Road 309 on the eastern bank of the St. Johns River. The site consists of a large sand mound and several nearby middens.

The Mount Royal site was occupied beginning about 4,000 years ago. The site was largely unoccupied from 500 BCE until AD 750. Mount Royal was occupied again after 750, and after 1050 it grew into the main town of an important chiefdom with connections to the Mississippian culture. The town lost importance after 1300, but a settlement, called Enacape, was still there when Europeans entered the area in the 1560s. The Spanish mission of San Antonio de Enacape was located in the town from 1595 until after 1656.

The Mount Royal site is located on the east side of the St. Johns River between Lake George, to the south, and Little Lake George. The site is on the north side of a short section of the river that flows to the west (the river in general flows northward). The most prominent feature is a large sand mound about 90 metres (300 ft) from the river. A causeway or avenue, still visible at the end of the 19th century, but since obscured, ran north from the mound to a rectangular pond. The mound is on a 1 acre (0.40 ha) parcel now owned by the State of Florida. The surrounding area, including the middens and village area, is part of the Mount Royal Airpark residential development.

The Mount Royal site entered the archaeological record in 1766, when John Bartram and his son William visited it. William returned to the site 15 years later. They found a sand mound 100 yards (90 m) in diameter, and almost 20 feet (6 m) tall. The Bartrams described an "avenue" running north from the mound, with raised banks on the sides. The avenue was "level as a floor", 60 yards (50 m) wide, and extended about .75 miles (1.2 km) to a rectangular pond 100 yards (91.4 m) wide and 150 yards (137.2 m) long. John Bartram speculated the pond had been a borrow pit from which the sand in the mound had been taken.

On William's return to the site, he found that an orange grove and palms and live oaks that had flanked the avenue in 1766 had been cleared in preparation for planting. The 19th-century archaeologist Samuel Haven called the reports published by the Bartrams "the earliest 'careful and intelligent' descriptions of a native American Indian mound."

In 1891, Clarence Bloomfield Moore, a self-trained archaeologist, investigated shell middens along the St. Johns River. In 1893, he returned to the St. Johns and began excavating sand mounds, including the one at Mount Royal. In two short seasons (two-and-a-half weeks in 1893 and three weeks in 1894), Moore excavated and backfilled almost all of the sand mound. He published his findings at Mount Royal in two parts in the Journal of the Academy of Natural Sciences of Philadelphia in 1894, a total of more than 250 pages.

In the early 1950s John Goggin and his students from the University of Florida collected potsherds and other artifacts from the ground surface of the middens and other areas surrounding the Mount Royal mound. By this time the avenue reported by the Bartrams and Moore was no longer visible from the ground, but did show up in aerial photos. With the area slated for residential development, B. Calvin Jones of the Florida Bureau of Archaeological Research conducted investigations in 1983, 1994 and 1995, including shovel tests and focused excavations of selected areas. 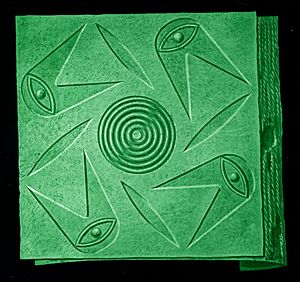 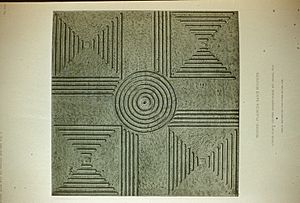 Moore found charcoal mixed with the sand at the bottom of the mound. While not saying so explicitly for Mount Royal, Moore speculated in his reports on excavations of other sand mounds along the St. Johns River that fire was used in rituals at the beginning of mound construction. Other than some white sand at the base, the mound was constructed with yellow sand from the immediate vicinity. Sand that had been colored by the addition of hematite was found in layers in the mound. Artifacts were more common in the hematite-tinted sand layers than in untinted sand. The entire mound had been capped with hematite-colored sand, in a layer up to 2.1 metres (6.9 ft) deep in one section. Moore described the color of the hematite-tinted sand as "crushed strawberry", "brick red", and "Indian red".

The first inhabitants of the Mount Royal site, who arrived around 2000 BCE, practiced the culture of the Orange period. Orange period people were hunter-gatherers, harvesting shellfish and fish from the rivers and coastal waters of northeastern Florida, gathering wild plants, and hunting. The Orange period began with the appearance of pottery in northeastern Florida, shortly after the appearance of pottery in coastal Georgia and South Carolina, the earliest in North America.

After about 1050, chiefdoms developed among the people of the St. Johns culture. The chief of a larger village would exert political power over smaller villages in the area. Particular powerful chiefs would form confederations with other chiefdoms. The most powerful chiefdoms, wielding political and religious power, became ceremonial centers, with their status demonstrated by the construction of mounds. Mount Royal was such a ceremonial center for centuries, perhaps the largest over a wide area along the St. Johns River.

On May 7, 1973, Mount Royal was added to the U.S. National Register of Historic Places.

All content from Kiddle encyclopedia articles (including the article images and facts) can be freely used under Attribution-ShareAlike license, unless stated otherwise. Cite this article:
Mount Royal (Florida) Facts for Kids. Kiddle Encyclopedia.