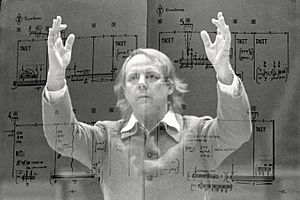 In photography, a multiple exposure is when a single frame of film is taken more than once. This usually happens accidentally if the photographer forgets to advance the film. To prevent multiple exposures, most modern cameras will not let the photographer open the shutter again until the film is advanced. It can also be used on purpose for special effects, such as creating a fake photograph of a ghost. The resulting image will be a combination of all of the shots. Multiple exposures are not possible on digital cameras, but the effect can be simulated with the alpha channel feature of photo editing software such as Photoshop or GIMP.

All content from Kiddle encyclopedia articles (including the article images and facts) can be freely used under Attribution-ShareAlike license, unless stated otherwise. Cite this article:
Multiple exposure Facts for Kids. Kiddle Encyclopedia.