Murphy is an unincorporated village in, and county seat of, Owyhee County, Idaho, United States. It is among the smallest of county seats nationwide, with a population as of the 2010 census of 97. Murphy is part of the Boise City–Nampa, Idaho Metropolitan Statistical Area. Murphy is also located within the census-designated place bearing its name. Murphy is home to the Owyhee County Historical Museum and Library.

Murphy developed around a railhead of the Boise, Nampa and Owyhee Railroad built in 1899. The state legislature selected the town as county seat in 1934, succeeding Silver City (which was located in the Owyhee Mountains and had been in decline; it is now defunct). The railroad operated until 1947. Murphy is the home of the Owyhee County Historical Museum and Library.

The community was named after Cornelius "Con" Murphy, a crew boss with the Boise, Nampa and Owyhee Railroad. 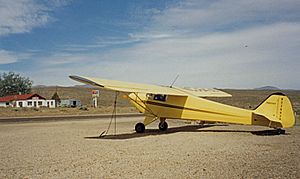 All content from Kiddle encyclopedia articles (including the article images and facts) can be freely used under Attribution-ShareAlike license, unless stated otherwise. Cite this article:
Murphy, Idaho Facts for Kids. Kiddle Encyclopedia.