Murphysboro is a city in and the county seat of Jackson County, Illinois, United States. The population was 7,970 at the 2010 census. The city is part of the Metro Lakeland area. The mayor of Murphysboro is Will Stephens. The government consists of the mayor and 10 city aldermen.

Murphysboro is located 5 miles (8.0 km) southeast of Kinkaid Lake. Although Murphysboro is only 10 miles from the Mississippi River, the nearest access points to the river are in the towns of Grand Tower and Chester.

As part of the humid subtropical climate (Köppen climate classification Cfa), Murphysboro can grow a small number of cold hardy palm trees that can live year-round, and can be found sparingly around the municipality. 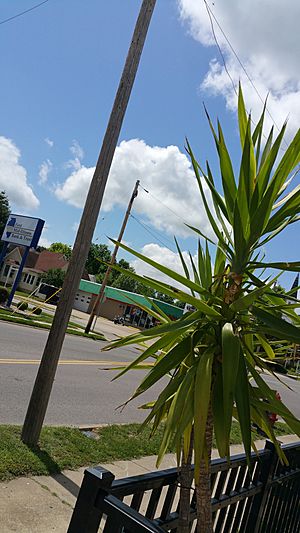 Established in September 1843, Murphysboro is the second county seat of Jackson County. Its birth is tied to the disastrous fire that destroyed the courthouse in the first county seat, Brownsville. The fire proved to be the catalyst to move the county seat to a more central location. The name was decided for the new town when William C. Murphy's name was drawn from a hat containing the names of the three commissioners who chose the new location, a 20-acre (81,000 m2) tract of land donated by Dr. John Logan and Elizabeth Logan. Logan County, Illinois, is named after Dr. Logan.

The son of the site's donors, Major General John A. Logan, later became a volunteer general in the Civil War. General Logan is also remembered for a distinguished political career, serving as Illinois’ US Senator, as well as for running for Vice President in 1884. At the time of his death he was considered a presidential hopeful. Logan's greatest legacy, however, is his creation of Memorial Day as a national holiday.

On March 18, 1925, 234 people were killed when the Tri-State Tornado hit Murphysboro. Murphysboro was essentially destroyed. Another F5 affected the area on December 18, 1957, the latest tornado of that strength recorded during a year.

On May 8, 2009 a derecho windstorm destroyed houses, brought down power lines, and left the town without electricity for a week. The surrounding woodlands and recreational trails were heavily impacted. This event is colloquially remembered as the "May 8th storm" or simply "May 8th." 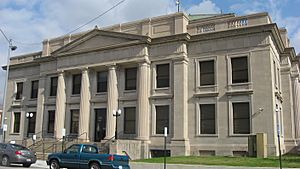 There were 3,704 households out of which 26.4% had children under the age of 18 living with them, 39.8% were married couples living together, 14.1% had a female householder with no husband present, and 42.5% were non-families. 37.1% of all households were made up of individuals and 17.8% had someone living alone who was 65 years of age or older. The average household size was 2.20 and the average family size was 2.91.

In recent years, business and tourism organizations have been at the front of renewing interest in the town as a center of historical and cultural tourism.

Murphysboro's General John A. Logan Museum, the Murphysboro Tourism Bureau, the Chamber of Commerce, and Friends of Murphysboro have been working together to restore interest in the maintenance of architectural treasures such as the Band Shell in Riverside Park, an example of the type of large-scale project of the Works Progress Administration; the Robert W. Hamilton House, a nearly intact example of 19th-century Carpenter Gothic architecture; and the Liberty Theater, once a $1-movie house now converted into a center for regional film festivals, nostalgia nights, and concerts.

The Logan Museum Neighborhood has been the site of a project designed to convert some of the neighborhood's homes into exhibit and gallery spaces. The Neighborhood currently consists of the Sheyley House, the Hughes House, the Horsfield Printshop, and the Bullar House. The Bullar House contains the museum's main offices and exhibit spaces. The Sheyley House is the headquarters of the Murphysboro Tourism Commission and host to an exhibit detailing the town's history. The Hughes House is dedicated gallery space available to local artists. The Horsfield Printshop is the only building of the four not open to the general public. It houses a seamstress shop that produces replica clothing for local schools and the General John A. Logan Museum.

Murphysboro is home of the Apple Festival, always the second weekend after Labor Day.

Murphysboro is the setting for Tammy, a 2014 comedy film starring Melissa McCarthy.

All content from Kiddle encyclopedia articles (including the article images and facts) can be freely used under Attribution-ShareAlike license, unless stated otherwise. Cite this article:
Murphysboro, Illinois Facts for Kids. Kiddle Encyclopedia.