Jackson County is a county located in the U.S. state of Illinois with a population of 60,218 at the 2010 census. Its county seat is Murphysboro, and its most populous city is Carbondale, home to the main campus of Southern Illinois University. The county was incorporated on January 10, 1816 and named for Andrew Jackson.

Jackson County is included in the Carbondale-Marion, IL Metropolitan Statistical Area. It is located in the southern portion of Illinois known locally as "Little Egypt".

Human occupation of Jackson County began about 11,500 years ago. Extensive documentation of the area's indigenous peoples has been conducted and is ongoing. Exploration from the European explorers began with the Joliet-Marquette exploration along the Mississippi River. It was not until the 18th and 19th century when pioneer farmers began to settle in the area's inexpensive land along the Mississippi River and in the forested Shawnee hills with its one-hundred-foot trees.

As early as 1813, Conrad Will, namesake of Will County, conducted a large salt extraction operation using slave labor on the banks of the Big Muddy River, south of today's Murphysboro. As this was in the "free" Northwest Territory, Will had to have a legal exemption to own slaves.

Jackson County was organized in 1816, having been carved out of Randolph County. It was named for Andrew Jackson, who had just defeated the British Army at the Battle of New Orleans.

Shortly after the American Civil War, General John A. Logan led a parade of veterans from Murphysboro to Carbondale, Illinois. General Logan, himself a Union veteran, invited the Confederate veterans, of which there were many in somewhat divided Jackson County, to march with him. What might have been another celebration of the Union victory became a memorial to the war dead on both sides. This is one possibility of the origin of the Memorial Day holiday.

In 1925 the great Tri-State Tornado ripped through Jackson County on March 18, leaving devastation in its path. The villages of Gorham and DeSoto and the city of Murphysboro were hit especially hard.

The county courthouse is in downtown Murphysboro. The current reinforced concrete courthouse replaced earlier wooden structures and was built during 1927-28. The original county seat was Brownsville along the Big Muddy River, but after the courthouse was destroyed by fire, the county government was moved upstream a few miles to Murphysboro. Few traces now remain of the old town of Brownsville. On February 27, 1843, the Illinois General Assembly created a commission to designate a new county seat for Jackson County.

The first coal mine in Illinois was opened on the south bank of the Big Muddy River near the present-day Route 127 Bridge. 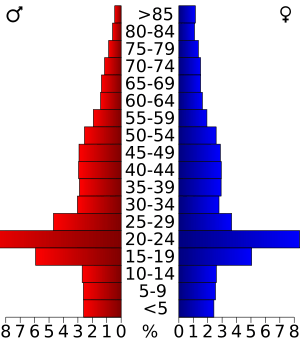 All content from Kiddle encyclopedia articles (including the article images and facts) can be freely used under Attribution-ShareAlike license, unless stated otherwise. Cite this article:
Jackson County, Illinois Facts for Kids. Kiddle Encyclopedia.