Williamson County is a county located in the southern part of the U.S. state of Illinois. According to the 2010 census, it had a population of 66,357. Its county seat is Marion.

Williamson County is included in the Carbondale-Marion, IL Metropolitan Statistical Area. This area of Southern Illinois is known as Little Egypt.

Williamson is a rapidly growing county in the Metro Lakeland area and is located 88 miles (142 km) southeast of St. Louis, Missouri. Via the nearby intersection of Interstates 57 and 24, and Illinois Route 13, a primary east-west four-lane expressway, the city easily has access to the major communities of Murphysboro, Carbondale, Carterville, Herrin, Marion and Harrisburg.

The Metro Lakeland area of Jackson-Williamson counties has a total of 120,000 residents. Carbondale (14 miles west), Herrin and Marion are the key urban areas in Metro Lakeland, with a combined population of more than 65,000. Over 235,000 people live within 35 miles (56 km).

Williamson County was formed from Franklin County on February 28, 1839, and was named for Williamson County, Tennessee. Many of its early settlers traveled on the Ohio River from Tennessee and Virginia. 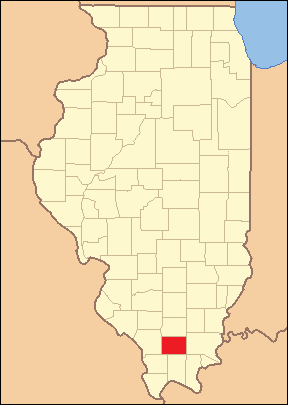 Williamson County at the time of its creation in 1839

It became a center of coal mining, attracting numerous European immigrants in the late 19th and early 20th centuries. Labor tensions rose as workers sought to unionize and improve their wages and conditions resulted in several episodes of violence. Williamson County is often referred to as "Bloody Williamson," due to several outbreaks of violence that have few parallels in American history.

Severe weather in Williamson County is not uncommon. The northwest section of the county suffered extensive damage during the Tri-State Tornado of 1925. The county was also struck by two tornadoes on May 29, 1982, which killed 10 people in the Marion, Illinois tornado outbreak. On May 8, 2009, the cities of Carterville, Herrin, and Marion were severely damaged by the May 2009 Southern Midwest derecho. 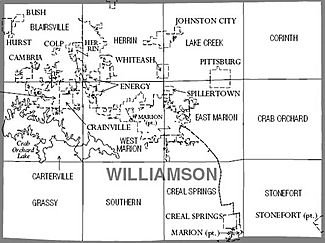 Williamson County lies on the border between humid continental climate (Köppen climate classification Dfa) and humid subtropical climate (Köppen climate classification Cfa), with neither large mountains nor large bodies of water to moderate its temperature. It is subject to both cold Arctic air and hot, humid tropical air from the Gulf of Mexico and, along with the rest of the midwestern United States, is home to some of the largest temperature extremes in the world. The region has four distinct seasons. Spring is the wettest season and produces erratic severe weather ranging from tornadoes to winter storms. Summers are hot and humid with only occasional and brief respite, and the humidity often makes the heat index rise to temperatures feeling well above 100 °F (38 °C). Fall is mild with lower humidity and can produce intermittent bouts of heavy rainfall with the first snow flurries usually forming in late November. Winters are cold with periodic snow and temperatures often below freezing; however, thaws are usually frequent. Winter storm systems, such as Alberta clippers and Panhandle hooks, can bring days of heavy freezing rain, ice pellets, and snowfall.

Williamson County experiences thunderstorms about 50 days a year on average. Thunderstorms contribute over half of the annual precipitation. Especially in the spring, these storms can often be severe, with high winds, large hail and tornadoes.

Some late autumns feature the warm weather known as Indian summer; some years see roses in bloom as late as early December.

All content from Kiddle encyclopedia articles (including the article images and facts) can be freely used under Attribution-ShareAlike license, unless stated otherwise. Cite this article:
Williamson County, Illinois Facts for Kids. Kiddle Encyclopedia.